Shot by Shot with the ‘Knives Out’ Trailer

With a cast impossible to ignore, Rian Johnson’s ‘Knives Out’ immediately rises to the top of our most anticipated films of the year list.
By Brad Gullickson · Published on July 4th, 2019

At two minutes and fifteen seconds, the first trailer for Knives Out immediately forces us to rearrange our most anticipated movies of 2019 list. The cast is impossible to ignore, and you must stop to pick your jaw off the floor once Daniel Craig‘s coin ceases its seemingly endless flip at the end here. Joining James Bond are Jamie Lee Curtis, Ana de Armas, Toni Collette, Chris Evans, Don Johnson, Katherine Langford, Riki Lindhome, Jaeden Martell, Christopher Plummer, Noah Segan, Michael Shannon, and LaKeith Stanfield. Take a deep breath. Oh, and by the way, the trailer may not reveal him, but Frank Oz is looming in the wings as well.

Rian Johnson returns from the galaxy far, far away to seemingly recharge his batteries with another celebration of a classic literary whit. The writer/director who found cinematic life through adapting the voice of Dashiell Hammett in Brick now turns his ear towards Agatha Christie. There are few delights as devilish as watching a collection of ne’er-do-wells squirm under the gaze of a brilliant detective, and Knives Out enchants through its adoption and subversion of the whodunit mystery.

C.S.I. K.F.C. Now that my jaw is off the floor, I’m happy to order a Big Box Meal extra crispy! On top of all those beautiful people filling the frame, cinematographer Steve Yedlin (The Last Jedi, Looper, Brick, etc.) is relishing the environment he’s trapped within. I’m digging all those exterior lighting sources glowing behind the windows and how they accentuate the pointy ends of that nasty knife wheel display where the confessionals are strategically positioned. Speaking of murderous design, bask in the talents of production designer David Crank (Inherent Vice, The Master) and set decorator David Schlesinger (John Wick: Chapters 2 and 3). If you’re going to force an audience to stare at only a few primary locations then you better do them up right and, boy howdy, have they ever here. Let’s cut into this trailer one slice at a time, and try a little hand at some speculation. The trailer opens on the mansion of Harlan Thrombey (Christopher Plummer). The sun has set, and a gray mist rolls across the grounds as a couple of hounds patrol the area. One shot and you’ve got the vibe of the place and the people inside — rich, lonely, isolated. The palatial estate is right out of Agatha Christie’s The Murder of Roger Ackroyd or Peril at End House. Somewhere inside Thrombey’s lifeless body was found surrounded by suspects. Detective Archer (LaKeith Stanfield) introduces himself and Trooper Wagner (Noah Segan) to Thrombey’s eldest daughter Linda (Jaime Lee Curtis). Towards the far right of the frame, you can see a pair of crossed legs belonging to Detective Benoit Blanc (Daniel Craig). Besides the wheel of knives, we see many other instruments of death and their furry victims splayed out on the floor. Again, luxuriate in the glow of the lighting sources. The room is warm; cluttered and open simultaneously. Archer and Wagner feel exposed in its abundance of wealth while Blanc kicks back refusing its attempt to highlight his otherworldliness. This is not his world, but he will not be ruled by it. “We just want to ask a few questions,” says Detective Archer. First on deck is Thrombey’s son Walt. Over his shoulder, we see an oil painting depicting a pirate’s treasure chest complete with a spilled human skull. Thrombey made his fortune as a novelist a la Stephen King, building an empire of wealth from tales of terror and death. His children, grandchildren, and friends all exist as an extension of that wealth. Like the pirates who stole that booty, they’re eager to collect and battle for what’s not theirs. Next, we meet Thrombey’s caregiver Marta (Ana de Armas), the only suspect not related to the victim. Her posture is instantly defensive, directing her eyes downward and away from Detective Archer’s questions. If she were a Clue character, she’d be the Mrs. White of the lot, the maid who has seen too much to maintain any kind of innocence. Do not trust her unassuming demeanor. Joni (Toni Collette) is the master of throwing shade. Every expression she delivers in the trailer bites. She’s aware that every conversation is a confrontation with a winner and a loser. She does not mean to lose. If Marta is Mrs. White, meet Mrs. Peacock. Mr. Peacock is actually Morris Robinson (Don Johnson), Joni’s husband. A servile son-in-law who pretends he doesn’t need Thrombey’s money by flashing a gold watch. He looks about as comfortable as Marta in that chair, ready to answer questions dutifully, desperately striving to cooperate even when it’s the last thing in the world he wants to do. Refusing to take his place before the wheel of knives is Thrombey’s grandson Ransom (Chris Evans). We will see his rightful position by the chessboard and the dollhouse later on in the trailer. Detective Archer continues, “We understand on the night of his demise…” 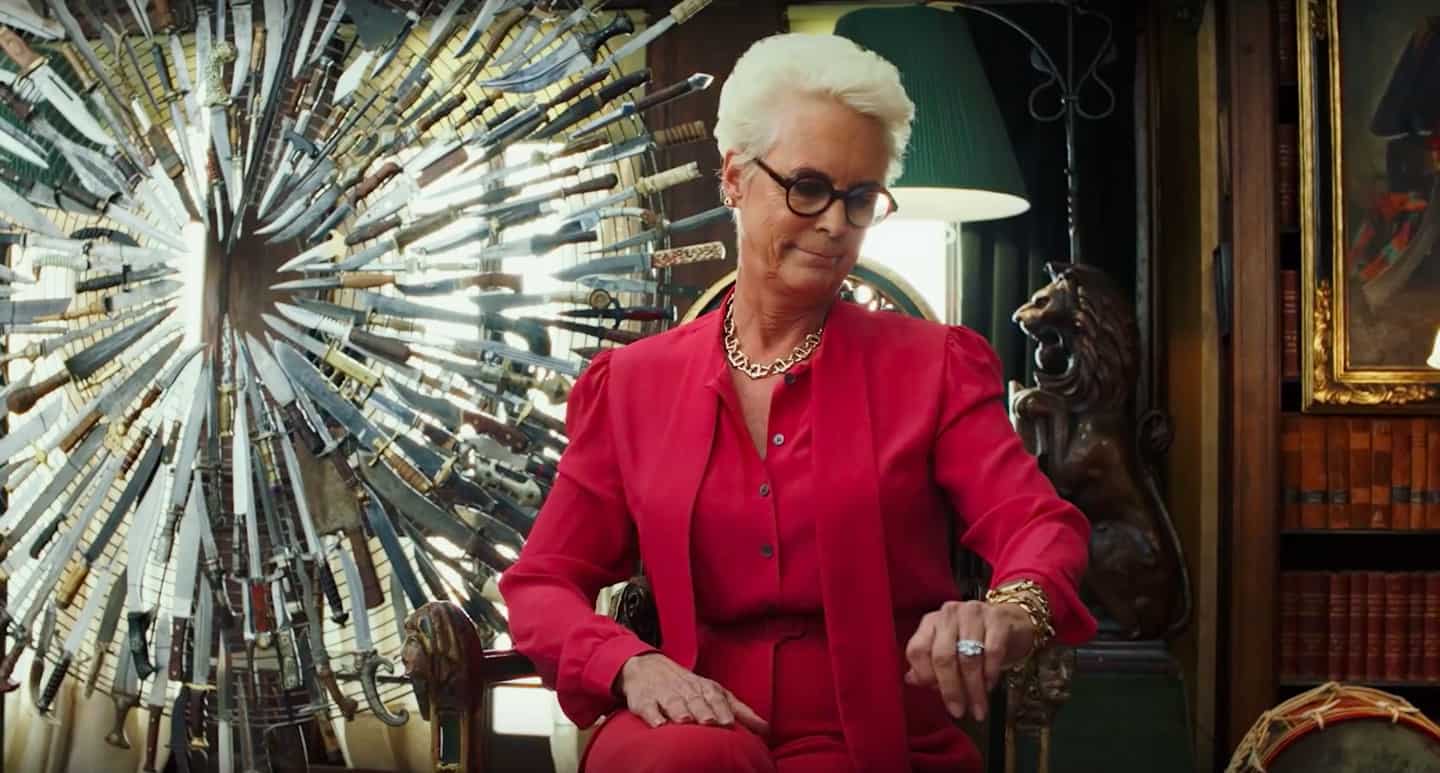 Linda checks her gold watch. She has no time for such foolish prosecution. While the score ominously hums in the background the lyrics to Radiohead’s song “Knives Out” rings through my head: “I want you to know/He’s not coming back/Look into my mouth/I’m not coming back.” The Thom Yorke tune is a perfect thematic echo of what Rian Johnson is cooking here. All suspects are cannibals of sorts.