Telling a youthful story of identity and self-exploration, Greta Gerwig’s coming-of-age film Lady Bird reflects the world of its lead character Christine “Lady Bird” McPherson (Saoirse Ronan) with utmost precision. Gerwig’s watertight portrayal of Lady Bird, an outspoken, often angry and rebellious senior at a Sacramento Catholic high school in 2002, is evident in all aspects of the film: from pitch-perfect dialogue lines to flawless soundtrack choices and subtle period details. And the film’s unruly and varied costumes designed by April Napier also do much heavy lifting in defining Lady Bird’s decisive year of adolescence. We follow Christine as she tries to find her own voice alongside her demanding mother Marion (Laurie Metcalf), supportive best friend Julie (Beanie Feldstein) and a pair of romantic interests (Danny and Kyle, played by Lucas Hedges and Timothée Chalamet respectively), while wearing a wide-ranging series of creative and thrifty outfits, reflecting both her evolving identity and her middle class family’s financial struggles, thoughtfully presented throughout the film with empathy.

When Lady Bird first meets Danny, “I am from the wrong side of the tracks,” she declares. To her, this is both a defiant statement that can coolly daunt (and perhaps impress) the visibly square and proper Danny and an economic fact that costume designer Napier took cues from in approaching her wardrobe. “Greta always referred to Sacramento as ‘the Midwest of California’, so it’s always a little bit behind the times, behind Los Angeles and San Francisco. So the idea of [times] and the [monetary status] definitely shows in Lady Bird. Her mom was very concerned about their monetary status, so it was important to her to take care of the clothes and make sure there’s nothing wasted. Whereas Lady Bird had a rebellious spirit, which may not have been affected by her monetary position. She has an innate sense of her own identity and her own individual nature.” 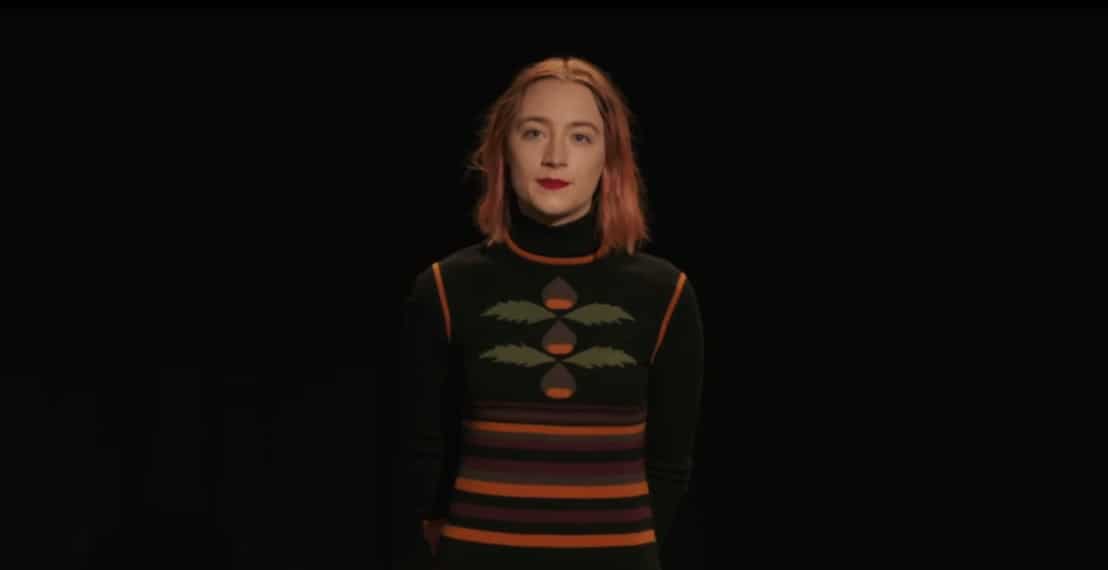 Earlier in the story, Christine proudly expresses her individuality with one of the film’s key looks: she wears a vintage sweater dress with a bold, sophisticated pattern to a school audition, during which she announces her self-given name Lady Bird in front of a crowd. So when she finds she has to settle with a lesser role than her best friend Julie, she drops the dress—a statement look in its own right—into the conversation. Napier recalls this garment fondly and recounts the scene during our conversation. “[Lady Bird] was like, ‘How did YOU get the part?’ with Julie. ‘I’m the one that had the dress. I’m the one that had it together.’ So, from her perspective, she knows she’s going to audition and claim her name. And what would Lady Bird wear to the audition? Everyone else wears the uniforms. But she has her own identity. So, in my mind, she was thinking, ‘What would Bob Fosse do?’ Greta always wanted that to be some kind of a theatrical statement dress because it’s such an important [moment]. It was a 1970s knit dress from a costume house. With that black background, it works really nicely.”

Throughout Lady Bird, Christine alters her overall look according to the situation she is trying to conquer or the person she is aiming to impress. One key example is what she chooses to wear to the Thanksgiving party hosted by Danny’s grandmother, who happens to live in the grand blue house Christine dreams of owning. “Danny’s family is Kennedy-esque [in a] classic and traditional way, so she shops at the thrift store [to find something] that would fit into what Danny’s grandmother would buy or like, trying to fit into that stereotype,” says Napier. And indeed, Lady Bird finds a romantic-looking nude-colored lace dress in Thrift Town (a massive second-hand store used as a location in the film a number of times) for the occasion and wears it with pearls. A brief scene after Christine and her mom find the perfect Thanksgiving dress gives us a glimpse of Marion behind a sewing machine, altering and updating the lace dress. “That was definitely an idea of Greta’s,” Napier tells me. Gerwig wanted to make a point of showing that Christine’s mom knew how to take care of things, to mend clothes. “She’s trying to make everything good for their family [despite their] difficult situation. ‘I want you to be the best you can be,’ she [even says later on.]

When Kyle comes into the picture as a new boyfriend, Christine assumes a new look head-to-toe, going from more proper to grunge. “She starts trying on the identity of a more alternative kind of world,” Napier indicates. “I referenced ‘Joy Division’. She was a ‘Mary Jane’. All of those costumes were made up in that vein, like ‘The Pastels’, like that scene in-between the ’80s and the ’90s. It’s what ‘The Valentines’ would have been about. So, she starts feeling more that way. He’s also really politically active, so she is becoming more aware philosophically of what class is.”

Of course, no high school senior year would be complete without a prom, to which Lady Bird wears an unexpectedly bright pink-ish tea-length gown with a full skirt and sparkly embellishments; another thrift store find with her mother. “Greta had always wanted her to wear red or pink gowns to have that color. But when you think about what Lady Bird would wear for the prom, she’s not going to wear something that’s store-bought, she doesn’t want something that’s normal. She’s going to buy something special. And so we had the thought: would it be a 1970s thing, or would it be an 80s thing? What would appeal to her? Greta really liked the idea of it being a 1950s party dress.”

One of the final looks we see on Lady Bird when she finally makes it to New York is made up of flared jeans, a striped top, and a blazer. This is yet again another character evolution that Napier reflects through Christine’s clothing choices, who had never looked more smartly put together, urban or “academic” before. The individual pieces still convey her limited budget and don’t necessarily follow the latest trends given they were also (probably) bought from thrift stores in preparation for college. But they portray Christine’s personal flair and creativity once she finally makes it to the liberal town of her dreams where, in her words, culture is.

Freelance writer and film critic based in New York. Bylines at Film Journal, Time Out NY, Movie Mezzanine, Indiewire, and others.