Where Westerns Fit in Modern Society

They are more than just a relic, but an opportunity for reinvention.
By Emily Kubincanek · Published on January 22nd, 2018

Christian Bale portrays the quintessential Old West tough man in Hostiles, which comes out on Friday, but his film does more than just perpetuate most of the Western cliches. It uses the genre to reimagine the fantasy of the Old West in a more honest way. With a genre many people consider to be ancient now back in theaters, it brings to question what Westerns have to offer modern cinema. The history of what the Western has been and how filmmakers can use it to bring a new voice to conventional stories could help bring new life to a dead genre.

Classic Westerns and their problems

The Western has been a significant genre as far back as silent films. Before that, stories of cowboys and their legendary conquests through the United States were told all over the country. However, the characters we know from the West — Billy the Kid, Butch Cassidy, Buffalo Bill (coincidentally all played by Paul Newman on screen) — were not the heroes we see on screen but outlaws. 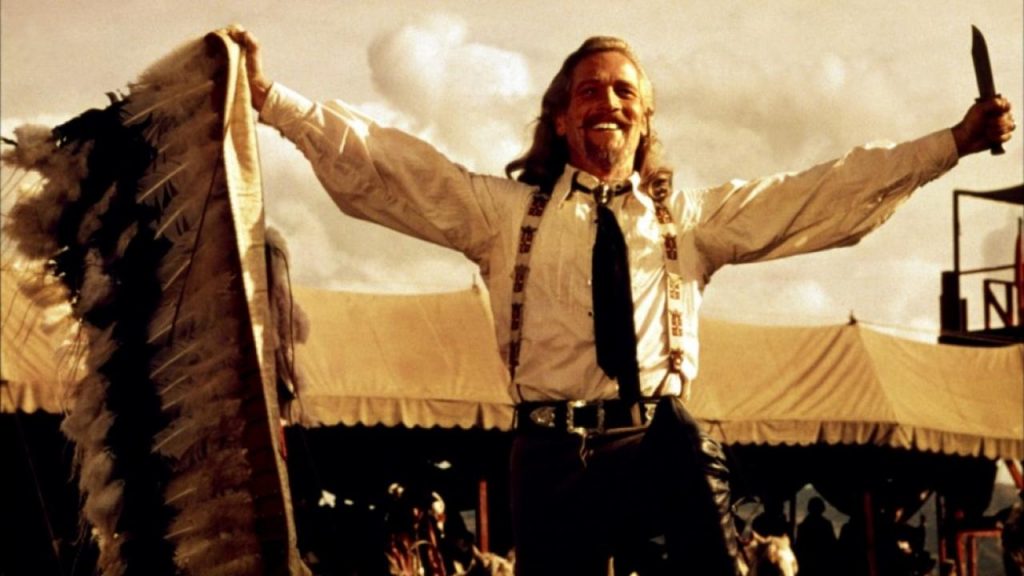 Somehow the Western has become a genre dripping with nostalgia. This is partly because it became a relic of Old Hollywood for the most part, dying out in major cinema and moving to television. The storytelling helped create heroes out of killers, marking them as misunderstood men but not without a moral code. With very little variation, the stories continued to end with the heroic cowboy or sheriff bringing justice and “doing the right thing.” These stories are satisfying for many, but they are, like their characters, a myth.

This myth of a time when values and morals held a greater position in society than they do now is not exclusive to Western imagery, but it is what keeps many people drawn to those movies. Especially now, when nostalgia is being celebrated in almost every facet of life, even politics, the Western emulates how a lot of Americans think of society. The Western perhaps unintentionally benefits from this mythical “better time,” like Andrew Patrick Nelson discusses in his book “Contemporary Westerns: Film and Television Since 1990“:

In creating a sense of nostalgia regarding the American West, advertisements not only evoke but also reinforce the myth of the West. Nostalgia conjures sentiments of loss and/or longing for what once was, thus indicating that the American West no longer exists, along with the cowboy. While the West has changed, cowboys, their images, and the ideology associated with them do in fact still exist in contemporary times. Indeed, the act of placing a sense of nostalgia to the images is one aspect that permits them to connote mythologically (140).

Many people watch Westerns now because they make them feel like there was a time when the ideology they believe in reigned over anything else. This is also a reason many people don’t watch Westerns. They celebrate conservative values like they are the only right way to act when they are far from it. They paint minorities, especially Native Americans and Mexicans, to be the villains who challenge the ideology the cowboys hold dear. When they aren’t the enemy, they’re written in very constricting stereotypes that help continue the negative sentiment towards Mexicans or Native Americans.

The modern viewer should recognize that those aspects of a Western are wrong, and many of us do. They should make you angry, but they’re still popular amongst a lot of Americans. They reflect how many people still feel now, those who look on Westerns as a “better time” when they so insensitively write characters. Perhaps we can use these outdated and mythical ideologies in Westerns to better understand why people now still love them, and how we convince them they aren’t a truthful depiction of the American West.

Using the genre for progression

One thing some people praise about Hostiles is its attempt to use the genre and cliches of a Western to tell a more truthful story of the West. In doing so, it hopes to use people’s mythical paradise to show them their values are problematic and exclusive. It’s a genius attempt to not just take a fresh take on a crowd-pleasing genre but to reach people who are so set in their ways with a new perspective disguised as the kind of story they love.

This is not a new tactic. Taylor Sheridan, director of 2016 neo-Western Hell or High Water, explained to the Guardian the allure of the genre that depends on subtext for new ideas, “The holy grail is putting ideas into a movie that also entertains. The western allows you to put sugar on the capsule to make the ideas go down easy.” By using a conventional genre, modern subtext can help reach audiences with modern values in a medium that would not be preachy. This seems to be the goal of Hostiles as well. In its premise, it forces a man to confront his hatred for Native American people and help them despite that. Whether or not it achieves that, we will have to see, but its attempt in its own right is commendable.

Making traditional characters take actions out of the ordinary in traditional settings is one way to reinvent the genre and bring in modern ideas. The Coen Brothers did this with No Country for Old Men, as Nelson also analyzes in his book: “No Country for Old Men posits a rupture in values between the Old West and the New. About the only thing that’s the same is the geography, and the geography, and the Coens, working with cinematographer Roger Deakins, take full advantage of various locations in Texas and the high New Mexico desert on which they overlay the meditations of Sheriff Bill (taken directly from the novel) (96).”

Another way is to use Western tropes outside of the traditional American West setting, as Hell or High Water does in modern rural Texas. The bad guy with good intentions kind of character is the same, but acting in a world with cell phones, security cameras, and other technology that makes his job harder. Through old cliches and a new setting, Sheridan comments on the current issues of today, issues that we know aren’t so new.

The Western can be a good indicator of history, false and true. It gives us an idea of how people see the past in an untrue manner, one we can use to show the truth. It can be a great medium to use modern ideas and reach conservative and traditional viewers. By bringing something new, it can bring new audiences to an older genre, as well. The Western is begging to be reinvented and rediscovered to reflect a truer story of the historical American West while giving us some insight on the same issues still prevalent today.