Instead of making up all of the movies and TV shows Rick Dalton appears in, Quentin Tarantino often inserted Leonardo DiCaprio’s character into existing material.
By Christopher Campbell · Published on July 29th, 2019

Quentin Tarantino doesn’t just play with historical events in Once Upon a Time in Hollywood. The fantasy film reworks pop culture as much as it does real incidents as they happened in our world. Why shouldn’t Tarantino have fun with alternate timelines in a grand scope? Fictional famous characters are already invented for the story of an actor and his stunt double at the end of their industry’s Golden Age. More than conceiving fake movies and TV series the main characters star in, as is done with most films of this kind, Tarantino inserts Leonardo DiCaprio as Rick Dalton into existing works or similar. Below is a list of these titles and how they all went in our dimension. There are a few real actors who clearly inspired the character of Rick Dalton in OUATIH. Clint Eastwood, Burt Reynolds (see below), and Steve McQueen (who is even briefly portrayed in the movie by Damian Lewis). Dalton’s made up TV series, Bounty Law, does seem to be most modeled after McQueen’s early Western TV show Wanted: Dead or Alive, in which he also played a bounty hunter. McQueen even began a 23-year relationship with stunt double Loren Janes on the series. The two would go on to collaborate again (though not for the motorcycle jump, that’s Bud Ekins) in the next entry below. As far as I can tell, however, Wanted: Dead or Alive was never, like its fictional counterpart in the movie, filmed at the Spahn Movie Ranch. One of the first hints that we’re in for some What If? situations in OUATIH is with Dalton’s story of being considered for the lead role of Hilts in John Sturges’ The Great Escape. McQueen did indeed wind up starring in the movie, which is about a group of POWs during World War II who escape from a Nazi prison camp, and that’s how it went in Dalton’s universe. But we get to see an imagined version of a scene from The Great Escape with Dalton in place of McQueen. We often wonder what movies would look like if other actors had been cast as iconic characters, so this is a fun illustration of that. Here’s the scene used: 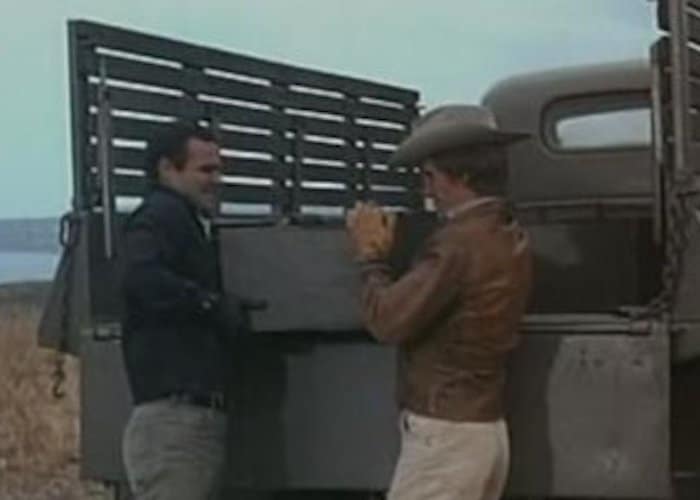 Rather than making up a fake episode of the ABC procedural The F.B.I., Tarantino decided to insert DiCaprio as Dalton into one that was produced and broadcast, albeit back on November 28, 1965, more than three years prior to the date in the movie. Maybe it was a rerun? It doesn’t seem to be within the narrative. In the alternate reality of OUATIH, Dalton portrays a criminal who was played in our world by Burt Reynolds. That’s an interesting Easter egg since Reynolds was supposed to be in the movie as George Spahn before he passed away and had to be replaced with Bruce Dern. Also, James Marsden was to portray Reynolds in some capacity in the movie. The clip of DiCaprio as Dalton performing a song on the NBC musical variety show Hullabaloo is no effects wizardly like some of the others. As far as I can tell, nobody else performed the tune (“Green Door”) in an existing episode. But it’s known that fictionally The Kinks were the main musical group on his episode, which he did to promote his 1965 TV movie Tanner (based somewhat on the 1958 movie Gunman’s Walk), and that band did perform in a February 1965 episode that featured Frankie Avalon and Annette Funicello as hosts. But here’s a later episode hosted by Route ’66 star George Maharis that more resembles the Dalton bit: When Rick Dalton heads to Italy, he stars in three Spaghetti Westerns: Kill Me Quick, Ringo Said the Gringo, which was inspired by Duccio Tessari’s A Pistol for Ringo and The Return of Ringo; Red Blood, Red Skin, which is inspired by the 1970 American Western Land Raiders (featuring Dalton’s co-star Telly Savalas), and Nebraska Jim, which is the one most directly connected to a real film of the same name. Well, that was one of the alternate titles for Ringo del Nebraska, better known in English as Savage Gringo, anyway. Ken Clark was the star of the real deal from our own world. Also known in English as Moving Target, chase scene footage from the Italian spy movie Death on the Run by Sergio Corbucci was used for the Rick Dalton vehicle titled Operazione Dyn-O-Mite! Ty Hardin is the real star, playing a man in possession of a microfilm MacGuffin that’s sought by both government agents and international criminals. I’m not sure who is really jumping the car over the bridge, but it could be credited stunt performer and driver Sergio Mioni, who would go on to work on Raiders of the Lost Ark as the driver of the truck in that movie’s famous chase scene.

Operazione Dyn-O-Mite! also references a couple of other earlier Italian spy movies, too: Giorgio Ferroni’s 1966 release Secret Agent Super Dragon, aka New York Calling Superdragon, stars an actor by the similar name of Ray Dalton and his leading lady is Margaret Lee, who shares billing in the OUATIH version opposite DiCaprio’s Dalton; and Kiss the Girls and Make Them Die, also from 1966 and also co-starring Margaret Lee, is a James Bond spoof known to be among Tarantino’s favorites and has an original title of Operazione Paradiso. We see no footage or filming of The Green Hornet in OUATIH, just a little friendly brawl that takes place at the studio during its production. Mike Moh portrays Bruce Lee, who co-starred on the show as Kato (and yes trained Sharon Tate in karate for The Wrecking Crew), fighting with Brad Pitt’s Cliff Booth, who is in wardrobe matching Rick Dalton’s tuxedo costume but is unexpected to be needed to do stunts. DiCaprio as Dalton is presumably nearby, maybe shooting or maybe still in his trailer. Booth winds up kicked off the set when he throws Lee into the car of Zoe Bell, who plays Kurt Russell’s stunt coordinator character’s wife.

Here’s why I assume the episode being shot at the time is the penultimate installment, part one of the two-parter “Invasion from Outer Space”: It’s the only episode I can find in which characters are in tuxes, though I can’t figure out where Dalton fits in (his character is said to be “The Hornet Hunter: Thompson Shaw”) since the main characters never get to the charity even they seem to be dressed up to attend. We also see some extras dressed as aliens walking in the background that look similar to the aliens in this episode. And also the stunt coordinator on the two-parter is Gary Kent, who was, similar to Kurt Russell’s character, married to an actress and stunt performer (Tomi Barrett), though that was later. Yes, it does seem like a lot of exact details for Tarantino to throw in for something like this.

Here’s part of the episode: A good portion of OUATIH recreates the pilot episode of the CBS series Lancer, and this one also plays around with actual chronology. The Western show premiered on September 24, 1968, a good four and a half months before it’s shown being filmed in Tarantino’s movie. The plot of the pilot is also different, with Dalton playing a “heavy” named Caleb DeCoteau opposite stars James Stacy (Timothy Olyphant) and Wayne Maunder (Luke Perry). In the first episode, which was in fact helmed by Sam Wanamaker (Nicholas Hammond), actor Joe Don Baker did play a similar bad guy called Day Pardee, and there is at least one scene similar to the saloon table moment between Dalton as Caleb and Stacy as Johnny Madrid.

There was no precocious child actress nor character named Mirabella Lancer (as represented by Julia Butters in the movie) in that first episode, only 21-year-old Elizabeth Baur, who played a kid sister-like character on the show as a regular. The closest thing I can think of to Butters’ character is when a 10-year-old Eve Plumb, of eventual The Brady Bunch fame, appeared as the titular character of the 1968 episode “The Heart of Pony Alice.” Keeping in line with the idea of alternate histories and versions of things, the pilot of Lancer was shot twice, once in black and white, with extra scenes — that one is called “The Homecoming” — and once in color, the version originally broadcast and titled “The High Riders.”

The pilot in OUATIH comes off sort of like fan fiction, and Tarantino was able to so much with it because he bought the rights to the show. Early reports hinted that the filmmaker was looking to remake Lancer as a limited series or movie, but he’s done his adaptation within his new feature instead. I see it as a possible test run for his desire to make a Star Trek movie, which would also be a kind of fan fiction production as well. Anyway, watch the real Lancer pilot in black and white below.