Yes, he’s a creepy, murderous clown. Yes, I am climbing down into that sewer.
By Hannah Payne · Published on August 29th, 2019

One does not need to be a horror aficionado to know that when a creepy clown beckons from a darkened sewer, it’s probably best to run in the opposite direction. So, what could such a clown possibly say to successfully lure someone in?

This very scenario became the basis for one of 2017’s most iconic memes, in which Pennywise the Dancing Clown from IT lurks in the sewers, offering something irresistible. Now is the perfect time to revisit and celebrate this meme about clowns and bad decisions with IT: Chapter 2 looming on the horizon.

The “Pennywise Sewer” meme rose to prominence well before the release of the 2017 film adaptation, in which Bill Skarsgård plays the eponymous “IT,” an evil shape-shifting entity that takes on the appearance of a clown, among other forms, and terrorizes the children of Derry, Maine, every 27 years.

Pennywise has been around and kicking (or dancing) since Stephen King’s 1986 novel, as well as its initial adaptation in the form of a television miniseries in 1990. According to Know Your Meme, it was this incarnation, in which Tim Curry dons the clown suit and makeup, that spawned the first known Pennywise the Clown meme back in 2010.

Despite Pennywise’s early presence in the world of memes, it was only when users on Twitter began to ruminate on what he could offer to make someone eagerly slide into a sewer that he became the iconic meme we all know today. The template immediately took off, especially following the new film’s release. 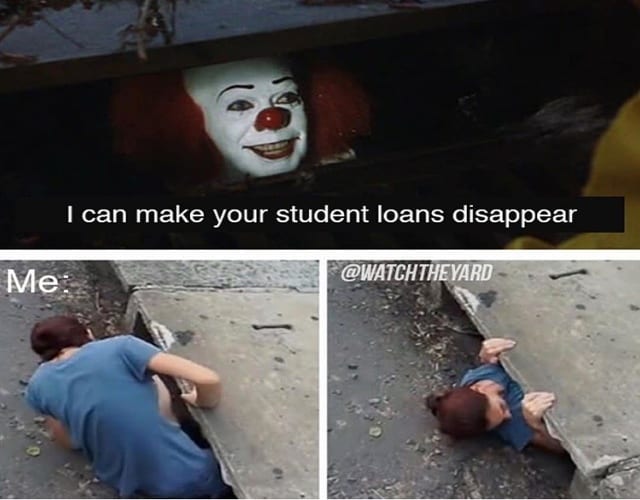 Examples depict Pennywise offering access to a Netflix account or resolved student loan debt, followed by screenshots of someone eagerly crawling into a sewer, images taken out of context from a video of a woman rescuing kittens. The meme even spawned a spinoff, in which Pennywise offers something so awful that the reaction image is a construction crew filling the sewer with cement.

So why did this meme have such a broad appeal? Part of it must be the common childhood fear of clowns. Another aspect of the meme’s popularity is inevitably due to IT‘s box office success as a horror novel adaptation that hadn’t previously taken a theatrical form. Yet, another element at play here is ultimately the message of the meme itself: deliberately and consciously making a bad decision for a very specific price. Pennywise’s temptations are messages that compel an entire group or even a generation to hypothetically crawl into a clown-infested sewer. The individual memes created in this format were simultaneously specific and widely relatable, which explains the relative longevity of the Pennywise Sewer meme. This meme unifies a community of people who are all willing to risk it all for some ultra-specific goal. If you can laugh, you are part of that group.

This blend of accessible content and hyper-specificity is what makes Pennywise an example of the quintessential meme. The combination of a hypothetical situation that everyone would fear, the humor of deliberately making a bad choice, and the dynamics of all being doomed together because of a common goal make this meme the perfect formula for an internet-wide inside joke. And isn’t that all a meme can aspire to be, at the end of the day?

The Pennywise Sewer meme is a meme of the people, and the wealth of clown-related meme content in recent years is at least partially due to his influence since 2010. Consider 2015’s McFreakin Lose It prank Vines or the current renaissance of clown memes that include TikTok videos and the ever-relatable clown emoji.

Let us not forget the lasting impact a sewer-lurking clown has had on the real world: leading up to and following the release of 2017’s IT, multiple cities had red balloons tied to sewer grates. With IT: Chapter 2 just around the corner, this is a time to celebrate all the ways terrifying clowns (and bad decisions) bring us together. Here’s to the future of Pennywise memes following this next installment!

An early 20th-century vaudeville performer-turned silent film star in a film student's body. Currently watching too many movies and writing too many essays in Santa Cruz, CA.