A Beginner’s Guide to Busby Berkeley

His set-pieces are legend, his showgirls are legion: here’s your crash course in the master of Hollywood escapism.
By Film School Rejects · Published on July 11th, 2018

Berkeley Williams Enos was born into a theatrical family in Los Angeles, California in the fall of 1895. He would go on to take Hollywood by storm under the flashier name “Busby Berkeley,” cementing himself as one of the greatest musical choreographers ever to grace the silver screen.

Berkeley had no formal dance training. His closest brush with choreography was organizing close-order marching drills during the First World War. He got his first taste of directing while mounting stage shows for American troops in postwar Germany. But a lack of training was never something Berkeley was ashamed of. Instead, he felt proud that his approach to dance was different than anything else on Broadway. As for the screen: Berkeley’s kaleidoscopic visions were a revelation, not only for movie musicals but for filmmaking itself.

Berkeley’s career was as vast as his dance numbers. He served as a choreographer and director well into the decline of studio filmmaking in the 50s and 60s. Suffice it to say: the scope of his work can be daunting. So strap in, crack open the champagne, and crank up the record player: here’s a beginner’s guide to Busby Berkeley.

Mention Busby Berkeley and your mind will rightfully conjure images of infinitely parading blondes morphing in unison into glitzy mandalas as the camera swoops overhead, underwater, and under hoop-skirts. And while Berkeley’s numbers have certainly stood the test of time, when it comes to movie musicals, we tend to take agile, oversized cinematography for granted.

So what do we mean when we say that Busby Berkeley liberated the camera? Well, bluntly put, before Berkeley: the camera didn’t dance. In fact, it couldn’t. See, back in the day before folks figured out how to synchronize pre-recorded sound, cameras had to be contained in giant, sarcophagus-like booths to muffle the very loud noise the cameras made, lest the racket be picked up on a mic. Since Berkeley had all but mastered synchronized sound, he didn’t need to entomb is cameras, nor did he have to shoot multiple angles at once for continuity. As a consequence, he was able to lean into the creative potentialities afforded by fluid camera motion and intricate editing. He could highlight his geometric proclivities through mind-blowing overhead top shots, weave between jewel-coated thighs, and swoop from window to window of a bustling city street to see where the action was at.

Berkeley numbers are known for breaking with reality: for starting on stage and spilling out into a time and place that can only be cinematic, returning, finally, to the stage, and to applause. Using purely mechanical rather means—armed with custom lifts, hydraulic platforms, and trick sets rather than arabesques, grand jetés, or elaborate Astaire tap dances—Berkeley used his camera to craft fantasy out of movement, and in so doing, transform the spatial possibilities of how to capture dance on screen.

It should come as no surprise that public interest in the Hollywood Musical hit a home run during the Great Depression. These were uncertain times, people craved entertainment, and a trip to the cinema offered a relatively inexpensive, albeit temporary means of escape. This was the crux of Berkeley’s contribution to musicals, always, fundamentally: make it fantasy; make it fun.

Movie musicals were on the decline during at the outset of the 30s. And it’s easy to see why. At the time, movie musicals tended to be slavish recordings of Broadway successes, filmed head-on, with the proscenium lurching out like a picture frame. Ostensibly, these films were supposed to mimic the experience of seeing a stage show, but something was being lost in translation.

Three films, each leaning on show-stopping Berkeley numbers, shook things up, bringing the movie musical back from the dead, and giving it some genre-defining legs to stand on: 42nd Street, Gold Diggers of 1933, and Footlight Parade.

42nd Street gave Berkeley the budget and creative carte blanche to bring musicals into a purely cinematic dimension. The film itself launched a fair share of generic clichés (backstage intrigue, hit-hungry directors, the unknown chorus member taking over the leading role on opening night). But what cemented 42nd street’s status as a blueprint for the movie musical genre was its showcasing of The Berkeley Style.

The “naughty, gawdy, bawdy” vision of 42nd Street was chockablock full of dance numbers too grandiose to be contained within the confines of any Broadway theatre. Likewise, in Footlight Parade and Gold Diggers of 1933, Berkeley sold the fantasy: he finessed the art of synchronizing the filmed image with a pre-recorded track; he interspersed vivid vignettes with gargantuan ensemble pieces; he found a visual language that coated the frame in gloss, garters, and glitter. The waterfall number in Footlight Parade is a masterclass in the impact of a good set-piece. Gold Diggers of 1933 offers elaboration of costumes, sets, and prop work that is, in its entirety, in service of fun.

There is often a critique levied against Berkeley that his numbers are more spectacle than dance. And lest we forget, Berkeley was, by his own admission, no dancer. Only that wasn’t entirely true. Berkeley was, arguably, the first director to truly, plainly understand that cinematic choreography is a dance between the camera and its subject. A kinetic waltz of close-ups, witty angles, and overhead shots, abstracting flesh into form.

Innuendo and the Code

One of the defining aspects of Berkeley’s style of dance is hundreds of gorgeous women dancing in scantily clad outfits that exposed their legs, midriffs, and the oh so scandalous belly button. Berkeley used his unique approach to capturing large dance numbers with a camera that moved as much as the chorus. This gave audiences a closer look at the dancers, previously impossible in stage pageants like The Ziegfeld Follies. Berkeley saw the camera as a way to give audiences the vantage point they’d always wanted: of countless beautiful women, with close-ups between a dehumanizing queue of spread legs. Truly, Berkeley is not only one of the great cinematographic visionaries, but one of the great cinematic voyeurs. And yes, all cinema has an inherent voyeuristic quality to it. But once you shoot your umpteenth upskirt shot you might as well laminate your peeping tom card.

The formations devised by Berkeley often carried a sexual implication. In the “Dancing Until Dawn” number from Flying High (1931), men dance in a line between two spinning circles of women, charting out an obvious phallic symbol. According to the code, not only were the women in Berkeley’s numbers toeing the line between suggestive and vulgar, but their props were almost always an innuendo. Women tossed balls, held 5” bananas, and many other objects that meant more than just something fun to twirl. Sometimes the grand sets he created held sexual meanings as well, like the erect pillars women danced around in the “Don’t Say Goodnight” number in Wonder Bar (1934). Berkeley got away with such suggestive dance numbers because they were just that: suggestive, and abstract.

Clearly, Berkeley loved beautiful women. How he showed that love was seemingly contradictory. While he moved the camera in a way that projected admiration onto their bodies, he also used the hundreds of women as props and made them one large entity, rather than focusing on one for a long period of time. Brief close-ups during “parade of faces” were the closest the women in the dance numbers got to solos. Even then, Berkeley made sure that each dancer looked identical, right down to her weight. His revolutionary camerawork objectified the female figure by abstracting it into large patterns.

Berkeley’s voyeurism is obvious in the way he uses the camera, which tends to peek up dancer’s skirts or from underneath the floor. Just as the Follies’ shows were inherently about looking at beautiful women, Berkeley’s routines put women’s bodies at the forefront of every dance number, but never the women themselves. His voyeurism is most evident in the Gold Diggers of 1933 number “Pettin’ in the Park.” It features a very creepy toddler watching couples; see-through skirts show the dancers’ bloomers and women’s silhouettes as they undress behind a sheer curtain. Remarkable as it is that the number got past the censors, but it’s one of Berkeley’s most remembered routines.

Technicolor and the New Nostalgia

After Busby Berkeley got arrested for drunk driving and killing three people in a car accident in 1935, his career understandably went into slow decline. He began getting fewer and fewer jobs, eventually giving in to mental anguish when his mother died. A failed suicide attempt led him to a psychiatric ward and a hiatus from filmmaking and choreography. He did very little work until color film became the new standard for musicals, and eventually made The Gang’s All Here in 1943. With color, Berkeley’s routines became more extravagant than before.

In the 1950s, MGM and other studios called upon Berkeley to create numbers for new musicals, including Esther Williams vehicles like 1952’s Million Dollar Mermaid. By this time, musicals had a much different feel than Berkeley’s signature style in the 1930s. In the height of his career, Berkeley’s numbers didn’t tend to tie into the narrative, and could (and frequently did) stand on their own. Dance numbers were an intricate part of the story in musicals of the 50s, but they lacked the grandeur that only Berkeley could provide just as he lacked the narrative integration. His comeback in the 1950s offered a way to achieve both spectacular and plot-driven dance numbers. His choreography provided an unique escapism once again needed with the Vietnam War. His stories were surprisingly shallow, always embracing the ridiculous and sometimes stupid, but they were a great distraction from the horror of real life. Audiences not only needed the beautiful images to combat the available footage of war on their televisions but the dopey plots that didn’t require them to think. The elaborate sets and overhead shots were in full effect again, but for a new generation of audiences. 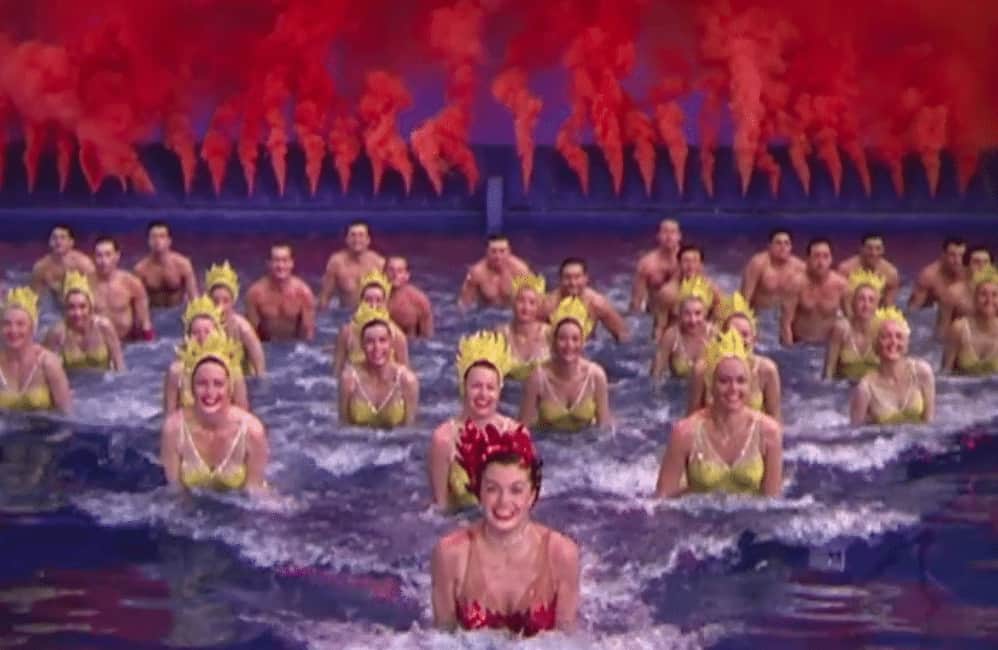 The 1960s brought a revival of 30s nostalgia, which in turn resurfaced interest in Berkeley’s work. His movies began playing in theaters all over the country. He believed the newfound demand for his movies was because no one ever had such spectacles on screen as he made in the 1930s. This resurgence in Berkeley’s career helped further cement his influence and stature in Hollywood history. And to this day, he remains one of the most famous choreographers of all time.

While Busby Berkeley’s style had a grandiose quality all its own, his work encapsulated the attitude and aesthetic of the 1930s better than any other filmmaker. The quality Berkeley’s detractors aimed to discredit was the very thing that made him into an icon, both of his time, and for all time. Had Berkeley conformed to contemporary expectations of dance and cinematography, movie musicals, and indeed film itself would be all the worse for it. Today, as ever, Berkeley’s message rings loud and clear: things can be hard, but there will always be fantasy.

This article was written by Emily Kubincanek and Meg Shields.