The 5 Best Comics to Read Alongside ‘Y: The Last Man’

Step one, read every ‘Y: The Last Man’ comic. Step two, follow Brian K. Vaughn and Pia Guerra into every other title they touch.
By Brad Gullickson · Published on September 10th, 2021

This article is part of The Reading List, a recurring column where we encourage you to take your enthusiasm for a particularly groovy movie or TV series and direct it into a wide array of extracurricular studies. This entry ranks the best comics to read alongside Y The Last Man.

After the early nineties speculator market imploded, the comics industry went into a tailspin. The big two companies (Marvel and DC) struggled with their identity, grasping for gimmicks before settling on – gasp – quality stories. Amongst these tumultuous waters, DC’s Vertigo imprint, born from Saga of the Swamp Thing, Sandman, and Hellblazer, continued to thrive. They were a big idea brand, and readers who OD’d on pretty yet hollow splash pages flocked under their umbrella.

Published in 2002, Y: The Last Man was a post-apocalyptic epic that delivered on a seemingly unimaginable horror while making its characters and their unique relationships the core selling point. From its first issue, written by Brian K. Vaughan and illustrated by Pia Guerra, we immediately connected with protagonist Yorrick Brown and his plight. As the last human carrying the Y chromosome, he represents our survival, but he’s also a bit of a lovesick dope who put all his hopes in the heart of a fiance who might – well, probably doesn’t – share his adoration.

When comics were at their bleakest, Y: The Last Man represented everything the medium could do. Its canvas was massive and addictive; you’d be damned if you missed a single issue. Guerra’s art navigated a narrow line between realism and cartoonish exaggeration. Even when her faces went broad, the emotion found in them was more real than real. As the reader, you felt like you controlled the pace, but Guerra actually pulled you along as quickly and as slowly as she desired. We were her puppets.

The new television adaptation on Hulu shares most of the elements you’ll find in the comics. Ben Schnetzer‘s Yorick is Vaughan and Guerra’s Yorrick. The same can be said for Agent 355, Dr. Allison Mann, and the little scrabbly capuchin, Ampersand. The show is certainly more in tuned with today’s politics and pandemic living. But if you find yourself drawn to it and can’t handle the anxious wait between episodes, you will absolutely find relief in the comic books.

Y: The Last Man, the Comic

We’ve seen the first six episodes, and while it certainly does not follow the comic book beat for beat, the series’ general vibe extends straight from the source. And who would want an adaptation to follow the original word for word, image by image? That’s no fun. We need a shift, especially in perspective. The show gives a lot more space to the comics’ supporting characters, giving us some much-needed solace away from a Yorrick struggling to comprehend his importance. Something you’ll have to contend with for an arc or two in the book before he snaps from his cataclysm shellshock.

With these Reading Lists, normally, I take the inciting film or TV show and use it as the basis for recommending various titles featuring the same characters and concepts. That’s a one-comic list for Y: The Last Man. You just read the whole thing—all sixty issues, or the three big brick omnibi by Vaughan and Guerra. And I’m confident that you’ll do so based on your enthusiasm for the series.

But, from there, you’ll want more. Y: The Last Man has a definitive ending, and you’re going to love it and hate it equally. The easy path is to follow Brian K. Vaughan. And Pia Guerra. Neither creator replicates the exact magic of Y: The Last Man, but that’s okay. That’s better than okay. In fact, you’ll probably find a comic series or two that you’ll love even more than Y. No, this has nothing to do with the Alex Garland film of the same name. Written by Vaughan during the same timeframe he was crafting Y: The Last Man, Ex Machina is an alternative history comic with a superhero slant. On 9/11/2001, Mitchell Hundred donned his flight suit as “The Great Machine.” In the air, using the unique gift that allows him to communicate with technology, Hundred managed to prevent the second tower’s collapse.

As America adjusts to life after the attack, Hundred runs for NYC mayor and wins. The comic bounces back and forth along Hundred’s timeline, showing his struggle as a burgeoning political leader as well as a crimefighter. Friends become enemies; enemies become friends. Ex Machina juggles multiple genres, never failing one for the other.

Tony Harris serves as the primary penciler on the book. His art brings a severe reality to the superheroes while masterfully capturing the tense subtleties in Hundred’s exasperated mayoral expressions. Reading Ex Machina is a lot like the first time you read Watchmen. In your head, you’re just going, “Yeah, this feels like how it would be,” even when the plots go way beyond the realm of normal. 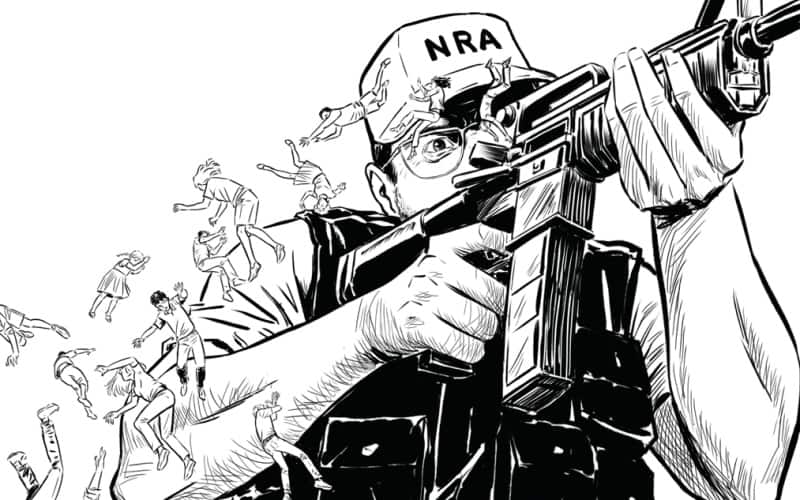 Pia Guerra kept me sane during these last several years. Her political cartoons for The New Yorker let me know that I was not alone. The world is mad. I see it, she sees it, and she puts it on the page with savage, sharp anger.

Me The People, from Image Comics, collects her very best stabs. There’s no real narrative, except for our compulsion for self-annihilation. And while you won’t find the characters from Y: The Last Man here, you will absolutely recognize the knowing rage that fuels her Brian K. Vaughan collaboration.

Guerra’s collection is noisy and impossible to ignore. A single image conjured by her will cut deep into your soul, and you’ll discover connection through this shared pain. Me The People is not a book you pick up when you’re feeling swell. No. You read this book when you’re good and pissed. It’s a rallying cry, a call to action. You’ll absolutely carry it with you into the voting booth. Paper Girls is where these comics start to get a little weirder. Fantastically realized by artist Cliff Chiang, the sci-fi coming-of-age story begins like the best Stephen King novels. It’s 1988. Erin has recently arrived in the sleepy burg called Stony Stream. She starts delivering newspapers on her bike to make a little cash and quickly makes friends with three other paper girls.

One night, the four are attacked by another gang of teenagers. They make chase, following these punks into a house still under construction, and when they make their way into the basement, they discover a time machine. To discuss any further would rob you of numerous surprises and escalations. But trust me, this comic is more than Stranger Things meets Back to the Future.

Paper Girls contains a grand mythology. Like Y: The Last Man, the comic takes on a sweeping narrative, but the world beyond the characters offers so much extra potential. The universe presented within could branch in many more directions if Vaughan and Chiang ever let the reigns off their baby. Doubtful, but it sure would be fun to see other creators play in this realm too. Pia Guerra jumped on Brenden Fletcher‘s Black Canary series for a single issue more than a decade after Y: The Last Man launched. This is not an epic. It’s a pop in the mouth, a short, sudden impact that stings well after the action is finished.

The Birds of Prey teammate is prowling dive bars looking for a kidnapped guitarist. Wherever she goes, she encounters resistance. They’re all suckers, and they crumple quickly under her martial prowess.

Guerra seems to be having so much fun with Dinah Lance. She gives Black Canary a swift yet weighty movement, and her glare is pure film noir. Issue four is a perfect one-and-done tale, something you’d give someone who was a little bit curious about the character having just watched the most recent movie. Or, someone who was looking for a little Pia Guerra change-up from Y: The Last Man. The artist can work in capes and spandex with the best of them. If you’re reading this list, and you’re already a Brian K. Vaughan fan, then this is the one title you expected to see first. I’ve never met a person who didn’t like Saga. Or didn’t like Saga if they made it past the first few pages.

The back of the book promises a science fiction spin on Romeo and Juliet. Two star-crossed lovers desperately attempt to celebrate their attraction for each other while their warring clans do everything they can to tear them apart. Plus, they have a newborn, and that little tyke symbolizes atrocity for so many political parties.

Inside the book itself, you’ll discover the most vibrantly inventive world-building that couldn’t possibly be replicated cinematically. Artist Fiona Staples delivers a realm that would cost multiple billions to realize on screen. The images are so aggressively offensive that they’d send grandmothers to obliterate the multiplexes. Totally uncool grandmothers, mind you.

The last Saga issue published in 2018. It ended on a cliffhanger and a brutally painful cliffhanger. Vaughan and Staples operate with the same philosophy as Robert Kirkman and Charlie Adlard do on The Walking Dead. Characters you love gotta die. I say this only as a warning. Steady your heart; it’s going to get broken.

Those that have read Saga eagerly await the next issue. It is coming. We’ve been promised.

Those that have not read Saga, well, now’s the time. Catch up while the rest of us agonize over the anticipation. Image Comics just collected the first nine trade paperbacks in one nifty boxset. Hopefully, after you’ve devoured Y: The Last Man and the available Saga titles, the next issue will be ready for you right on time.

Y: The Last Man premieres via FX on Hulu on September 13th.