After a decade of building hype around the collection of six infinity MacGuffins, and a lot of doubt surrounding Thanos‘ ability to meet fandom’s expectation beyond that space chair he firmly planted himself upon, the Mad Titan finally decimated Earth’s Mightiest Heroes in Avengers: Infinity War. Whatever skepticism percolated in your brain as you walked out of the theater, in the moment, when Peter Parker ashed in the arms of Tony Stark, we were all balling at this impossible cliffhanger villain victory. What was all that fervor about the MCU’s antagonist problem? Solved? Malekith is still trash.

Five minutes into his big coming out party and Thanos was already slaying Asgardians and putting the Hulk in his corner. In a franchise built on protagonists persevering despite their failures, the gargantuan purple mo-cap monster delivered a catastrophic climax in which not only the costumed crusaders had to absorb, but the audience as well. The Russo Brothers twisted the knife even further when they closed the nightmare on a contented smile from the righteous maniac. Thanos won.

A year later, and we’re eagerly anticipating the big fix that will return Black Panther, Spider-Man, and the Guardians of the Galaxy to their billion dollar sequels. In a universe populated with Time Gems, Quantum Realms, and Captain Marvels, Phase 3 will not be the end of The Avengers. Duh. The mighty will return, and Thanos will have that smug smile wiped from his face. Of course, yes, we’re all worried about Steve Rogers. He sure does fetishize that sacrifice play.

Avengers: Endgame is the culmination of a promise made by Nick Fury during the end credits of Iron Man. Marvel Studios reached into their vast source material and found a threat worthy of champions that count gods and monsters on their roster. Not only is Thanos mad and powerful, but he’s also a character consumed by purpose and doubt equal to that of the prey he routinely pummels.

Since his creation by Jim Starlin in the pages of The Invincible Iron Man #55 (February 1973), writers obsessed in establishing empathy for the tyrant. Infinity War and Endgame scripters Christopher Markus and Stephen McFeely continued in that tradition by exploring the heartbreak experienced between the Titan and his adopted daughter Gamora. Also, on planet Earth, where climate change is a happily ignored threat, Thanos’ solution of eradicating half of existence to make the universe barrable to the remaining few seems like a logical equation. He’s a monster with a point.

All of this is just a long way of explaining that Thanos is a character with as much of a rich and emotional history as any of the Avengers. A person may not have been compelled by Thor: The Dark World or The Incredible Hulk to go hunting through the back-issue bins for tales of Malekith and The Abomination, but in preparing for the purple grimace to get squashed, you probably have an urge for a deeper communion with this particular malefactor.

Below you will find my top ten favorite Thanos storylines. They range from the epic to the personal, the comedic to the horrific. Some you will already be deeply familiar with, but hopefully a few will catch you off guard. If you make your way through all of them, I’m betting you’ll enter Avengers: Endgame with a small part of your primal brain rooting for the bad guy. As the most obvious selection on the list it’s only fair that we kick off the comic book conversation with the most epic crossover event of the nineties. The six issues limited series written by Thanos creator Jim Starlin spins directly out of the pages of Silver Surfer. The Infinity Gauntlet was illustrated by George Pérez and Ron Lim but practically bled into every monthly Marvel title in 1991. For better and worse, this system of tie-ins would forever change Marvel publishing, and today readers cannot escape a summer where one mini-series doesn’t affect their entire line. If you’ve seen Avengers: Infinity War then you know the basic story: Thanos has gathered six infinity gems and captured them within the gauntlet. Wielding this weapon, Thanos gains mastery over Mind, Power, Reality, Soul, Space, and Time. The entire Marvel Universe assembles to combat the unbeatable, but it’s his daughter Nebula as well as his deep-seated self-loathing that ultimately brings the Titan to ruination. All your favorite cinematic players are here plus a bunch we’re still waiting to see realized in the MCU: Adam Warlock, Silver Surfer, Starfox, Mephisto, and Thanos’ beloved Mistress Death. 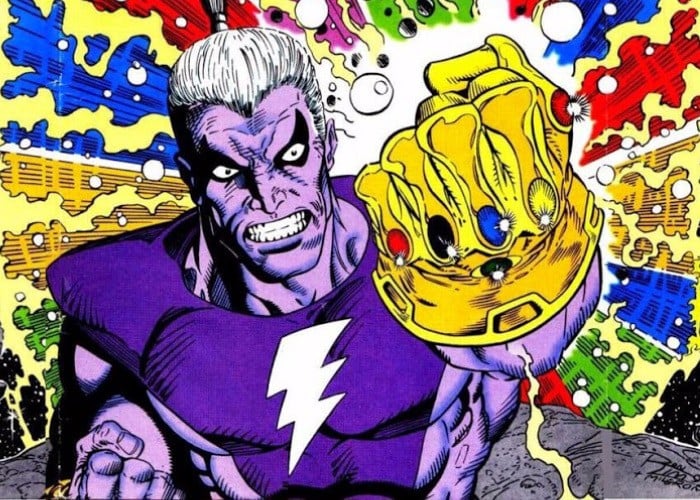 A year after The Infinity Gauntlet dominated sales, Marvel Comics returned to their greatest cosmic MacGuffin for this even more bizarre follow-up saga. The Gauntlet is now in the possession of Adam Warlock, and his first act is to rid himself of the good and bad elements of his being in favor of a completely logical existence. What he doesn’t realize is that this notion reawakens his evil double, The Magus. Using multiple cosmic cubes (more diabolical MacGuffins), The Magus gives birth to an armada of villainous doppelgangers to take on the Marvel Universe. Thanos finds it impossible to enjoy evil retirement on Titan and retreats to warn Warlock of the impending doom caused by The Magus. An unlikely partnership is formed, and heroes and villains unite to take on this horrendous threat. Much, much sillier than the original Infinity Gauntlet storyline, but I’d love to see Avengers: Endgame take the route of uniting hero and villain to battle a larger threat.