Sorry, 9 football movies to keep you in the World Cup spirit after the final.
By Anna Swanson · Published on July 14th, 2018

Once every four years, nations across the globe come together to celebrate the World Cup, to watch some of the world’s best players do what they do best, and for most, to go home disappointed when their country doesn’t win. But even if your team doesn’t get the result you hoped for, you can still enjoy the types of perfect victories that only come to us via the silver screen. And for those who don’t care for the sport, chances are you’ll find these nine films to be more entertaining than a 90-minute game that can end goalless. In Gurinder Chadha’s coming-of-age comedy, Jess (Parminder Nagra) is obsessed with the eponymous football superstar and the sport itself. Her traditional family forbids her from playing, but Jess joins a women’s team behind their backs. With issues surrounding family, culture clashes, and identity at the forefront, the film has a lot more on its plate than just who wins and who loses the game. But Bend It Like Beckham also understands what this sport means for those who love it. Football isn’t just a sport for Jess, it’s also an expression of her freedom and ambition. Any good sports movie and any good coming-of-age movie often need to have heart and a hero to root for, and thankfully Bend It Like Beckham has this in spades. Before Tom Hooper became known for turning out Oscar-bait every couple years, he made what is probably his best film, The Damned United. In a stellar performance, Michael Sheen plays Brian Clough, who is often dubbed “the greatest manager the England team never had.” The film follows Clough as he takes over as manager for Leeds United in 1974. Clough was revered as a manager for several teams, but his time at Leeds was, to put it mildly, contentious. Though Clough’s family challenged the historical accuracy of the film, it’s undeniable that Hooper and screenwriter Peter Morgan made a compelling drama that one need not know the history of English football to enjoy. In Escape to Victory, there’s a lot more on the line than just the game. Sylvester Stallone, Michael Caine, Max von Sydow star alongside real players such as Pelé and Bobby Moore as Allied prisoners of war in a German prison camp during WWII. The POWs plan an escape attempt to be made during a game against the Germans that is being held as a Nazi propaganda stunt. If you’ve ever wondered what The Great Escape would look like if it starred Sylvester Stallone as a goalkeeper, I have the movie for you. Before the 2005 Red Sox-centric American remake, there was this 1997 original that follows Paul (Colin Firth) as a man hopelessly devoted to his club of choice, Arsenal. His life is complicated as he begins to fall for a fellow school teacher and footy newbie Sarah (Ruth Gemmell). The film follows Paul and Sarah’s relationship through Arsenal’s rollercoaster 1988-89 season. As a blend of a sports movie and a Colin Firth rom-com, Fever Pitch has something for everyone. Launching the Goal! trilogy that would follow up with sequels in 2007 and 2009, The Dream Begins follows Santiago Muñez (Kuno Becker), the son of immigrant parents in Los Angeles, who is by chance noticed by a scout from Newcastle United. Muñez is recruited and joins Newcastle as they attempt to qualify for the Champions League. The film was made with the cooperation of FIFA and was allowed to use the names and jerseys of real players. Keen football fans would also be wise to keep an eye out for their favorite players as the film features cameos from world class players such as David Beckham and Lionel Messi, as well as countless others. 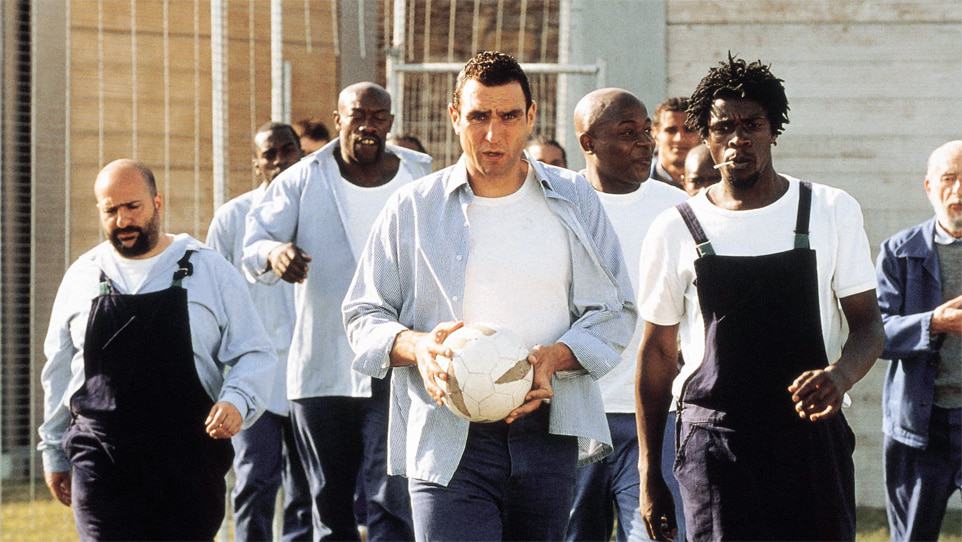 Before Adam Sandler tried his hand at remaking The Longest Yard in 2005, the Brits had a shot at adapting the Burt Reynolds classic, with a change made to swap American football for soccer. Starring Vinnie Jones, a former professional player in real life, the film follows Jones as Danny Meehan, an English player who is sentenced to three years in prison for assaulting two police officers. On the inside, he is recruited to captain a team of prisoners to play against the guards. The film also reunited Jones with Lock, Stock and Two Smoking Barrels and Snatch co-stars Jason Statham, Vas Blackwood, and Jason Flemyng. Ok, so Mustang isn’t a traditional football movie and it’s not especially focused on the sport, but who can forget one of the film’s most memorable sequences in which the five sisters at the focus of the story attend a game. The orphaned sisters live in a small Turkish village where they are kept under lock and key by their grandmother and uncle. After the local football team bans men from attending a game due to hooliganism, the girls see the possibility of being part of an all-female crowd as a way to briefly access the freedom they yearn for. Though they aren’t allowed to go, they manage to escape for the afternoon and experience the jubilation that comes with seeing your team win in person. This taste of independence shapes the rest of the story as the sisters, particularly the youngest, Lale (Güneş Şensoy), struggle against the stifling, traditional roles being imposed on them. Like Mustang, Offside is about several women intent on seeing their team play live. But the catch is Iran doesn’t allow women to attend the sporting event when their national team plays Japan in 2005. Women have to sneak into the stadium dressed as men and when they’re caught they are held and guarded in the stadium. It is this group of apprehended women that Jafar Panahi’s film follows. The director based the film on his own daughter’s experience trying to see a game and had to secretly film the movie because he hadn’t been approved to make it. The film’s interrogation of the treatment of women in Iran was controversial, as Panahi’s films often are. As he said about the movie:

“I use the football game as a metaphor to show the discrimination against women on a larger scale. All my movies have that topic at their center. This is what I am trying to change in Iranian society.” Adapted from Shakespeare’s Twelfth Night, She’s the Man follows Amanda Bynes’ Viola who masquerades as her brother, Sebastian, in order to play for his school’s elite soccer team after her own school’s team is disbanded. In typical Shakespearean fashion, things become even more complicated when Viola falls for fellow player Duke (Channing Tatum). Like Bend It Like Beckham, She’s The Man invokes rom-com tropes and blends them with sports movie staples to create an entertaining teen comedy that I’m sure any millennial will look back on with nostalgia.