‘Sin City: A Dame to Kill For’ Star Josh Brolin On Why You Should “Never Write Anybody Off” 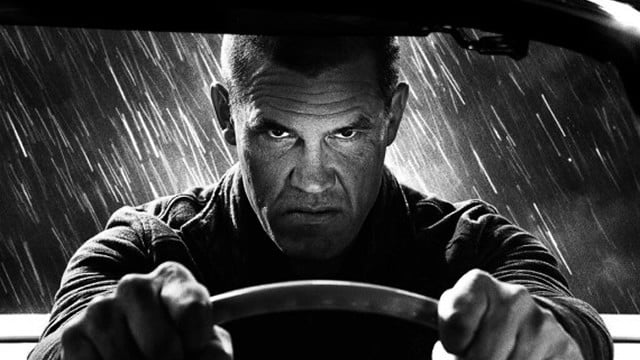 Josh Brolin’s performance in Sin City: A Dame to Kill For isn’t wildly dissimilar to his work in Men in Black III. They’re very different films and performances, of course, but both prequels feature Brolin inheriting a role from another actor. Brolin eerily embodied Tommy Lee Jones as Agent K, while in Sin City: A Dame to Kill For he’s channeling Clive Owen’s work as Dwight McCarthy from the first movie. This is Dwight before he had to change his face, which, in case you haven’t read Frank Miller’s comics, is why Owen isn’t back playing the character.

Whether Josh Brolin studied Clive Owen’s performance never came up in our wide-ranging conversation with the actor, who’s clearly pleased with both the film and his performance. With the exception of Labor Day — a film I’ll readily go to bat for ‐ it’s the first time since True Grit Brolin hasn’t had to carry a movie. Not because he isn’t the lead, but looking at Oldboy, Gangster Squad, and Men in Black III, the end products often weren’t on par with Brolin’s work in them. Thankfully, that’s not the case in this instance, nor should it be in the near-future.

Brolin has Paul Thomas Anderson’s Inherent Vice coming up, the Coen Brothers’ Hail, Caesar!, and Everest, a survival pic boasting an impressive cast. He’s also playing Thanos in the Marvel Universe. Brolin has a lot going on at the moment, but he took the time to speak with us at the junket for Sin City: A Dame to Kill For.

Here’s what Josh Brolin had to say about the unpredictability of filmmaking, the advantage of acting against a green screen, and more:

I was at Comic-Con last week. You got a great response there.

That was fun. That was very loosely planned. It was very crudely planned. I just kind of went with it. It was one of those things I didn’t really understand that well. I don’t mean the reaction to Thanos, but Thanos himself until I went out there. I realized with Robert [Downey Jr.] the whole rivalry that goes with it. It was cool, man. As someone who’s stayed away from that kind of thing for a very long time, I feel very confident in making the decision of this being the one.

I love Kevin Feige’s quote that you could play Thanos without makeup. I don’t know if that’s a compliment.

[Laughs] I don’t know what that means! It’s a backhanded compliment. I laughed when I heard that, too.

Jumping into A Dame to Kill For, I always thought it was the best book in the series. I think they did a good job bringing it to life.

Oh, good. I’m really glad to hear that. I’m curious, man…maybe I’ll interview you. Did you see a movie right before?

They screened The Giver before it.

That sucks. Not the movie…I don’t know how the movie is, but the fact that you saw one before Sin City, it’s the whole double-feature thing. I wish you had saw Sin City alone. You know, I’m pretty critical of stuff, but I really like it. It’s so loyal to what Frank did. I can’t get a beat on what people feel about it or whether people like it or not, though.

I think the fans will be happy with it. Miller’s writing calls for actors who don’t feel completely modern. Is it a challenge getting down that hardboiled dialogue?

Yeah. It’s a different vernacular. That dialogue can sound really stupid if you try to naturalize it. Personally I stayed away from that. I don’t know how everyone else approached it. I spent a whole career trying to naturalize good or bad dialogue. I just did Inherent Vice with Paul Thomas Anderson, and that dialogue is so dense. I get it, though. I understand the bong hit vernacular. With this thing, you can see it on the page. When I was a kid reading comics I saw how economical it was, with all these one lines. When I watched it I was happy that it doesn’t look like I’m trying to naturalize it. I felt I was being loyal to actually reading a comic book and turning the page.

Going big. Robert [Rodriguez], thank God for him, would go, “[raspy voice] The voice is more like that.” I asked him if he tweaked Dwight’s voice at all, but he said, “Nope. It’s all you.” With Thanos, it’s a little different. I think that was a little bit tweaked. Anyway…

I read some interviews with you beforehand and it sounds like your collaboration with Rodriguez on Planet Terror was a big part of the turning point for you.

Well, I worked with him when I was doing Mimic. I’ve known him for 21 years now. He did second-unit on that, because of all the stuff going on. It was so interesting. With Guiellermo del Toro, was he going to be fired from that movie? It was a whole debacle. Look at Guiellermo now. Look at Robert now. It’s funny, you never know, man. There were other movies Robert and I have talked about doing, but never worked out. When Grindhouse came up it was very sweet and I was very into it. With him and Quentin we watched a lot of old scratchy movies together. Quentin would get up and give his 30 minute dissertation with what we were about to watch, and Robert would be filming it. I’ve told this story many times, but they’re the ones that shot that audition tape for No Country for Old Men. It was a beautiful looking audition. Man, he gave me a break. I wasn’t working a lot at that point.

That really speaks to how unpredictable actors say the business is. If you didn’t do Planet Terror, maybe you wouldn’t have ended up in No Country for Old Men.

Totally, man. Robert and I were just talking about that last weekend at Comic Con. We were talking about George Lucas doing Star Wars and all his compadres were off doing Godfather and all the great movies of the 70s. Lucas was doing American Graffiti and these good movies, but they weren’t really hitting. They were more about the era, human interaction, and this and that. Then he finally said “fuck it” and wrote Star Wars. Everybody read it and thought, “What is this?”

[Laughs] And most of his friends hated it when they saw it.

Hated it! They were saying, “What are you doing?” Spielberg was the only one who said, “It’s kind of naive, simple, and sweet. I have a feeling it’ll do well.” [Pauses] Who knows? That’s the thing, you never write anybody off. That’s the most wild thing about this industry. You can never write somebody off. You’re an interviewer and film fan, but in 10 years from now you could literally be George Lucas.

[Laughs] I wouldn’t go that far.

But seriously. Honestly, there’s absolutely nothing keeping you from becoming that. You do a webseries that leads to a series, a film, or something. You never know.

It’s so immediate now, too. I can pull out my iPhone, make a short film in this room, and upload it to the Internet in an hour.

That’s actually true. Remember how Coppola’s wife filmed him on set in Hearts of Darkness? He said, before you know it, a nine-year-old is going to be able to pickup a camera and make a movie. There ya go.

That also led to one of the best documentaries ever. I’m sure they didn’t envision that.

Literally one of the greatest documentaries of all time.

Have you ever had one of those big messy experiences like Apocalypse Now?

A lot of messy situations, but you come to terms with it after a while. I just did a movie called Everest and it was very, very tough. At one point in London the snow wasn’t looking right, so they used bags of salt. The salt gets in your eyes, throat, nose, and you’re totally bloated the next day, because every drink of water you had is being held by the salt. It was not necessarily fun, but I know that movie is going to be good. I have a funny feeling about what we got. We we were working a lot in those mountains. There’s some CGI, but not a lot. We went up 17,000ft up to Everest Base Camp. Fun stuff. It’s stuff that makes it fun.

When it’s not so fun, do you miss acting against a green screen?

I imagine you must have more control over a performance in this kind of environment.

You do. Not to sound pretentious, but it’s all about you. You’re not really worried about everything else, because he’s going to fill all of that in later. It’s truly about performance. If you got it wrong it’s going to be obvious, which is great, because it’s a profession of humiliation. If you see something you need to fix ‐ the voice, attitude, or needing to be more afraid of someone ‐ it’s great, because it’s all right there. It’s all you. Everyone is focused on you. You know, I’m ready to do this Coen Brothers movie. It’s the total opposite.

It’s great how those two play with an actor’s image. Your character and performance in True Grit couldn’t be further away from the manlier roles you’ve played.

They do that. Absolutely. I remember when I came in getting really frustrated trying to find that character’s voice. We did rehearsals and all that, but then finally that voice came out. It was all kind of based on that thing of: maybe he’s just a child inside? He’s like Lennie from Of Mice and Men. That was cool, though. I was happy with that thing. I remember watching them edit the film. I like to watch them edit, whether I’m in the film or not. I started laughing at some point. They asked why I was laughing and I said, “I can’t understand one word of what anybody is saying. Jeff is drunk. Matt’s got his tongue cut out. I don’t know what I’m doing. Hailee is the only one you can really understand.” Anyway, I like the way that turned out.

Do you usually like watching a film coming together in editing?

Out of pure interest, not out of manipulation. I especially love watching the Coens edit. It’s so economical, so simple, and so straightforward. You have Ethan picking out of a log of prints and Joel there, who’s perpendicular to Ethan. They have a little bellman’s bell there. Ethan picks a print, drags it over to Joel’s upper lefthand screen, and they ring the bell. “Bing!” Joel looks up at the upper-lefthand corner.

Dude, it’s great. It’s fucking great. It’s literally meant to be as economical and as proficient as possible, and that’s why they turn in a first cut after seven weeks. It’s cool.

Sin City: A Dame to Kill For opens in theaters August 22nd.