What is it about Jeff Goldblum that gets the people going? His bare chest in Jurassic Park, for one.
By Mary Beth McAndrews · Published on September 5th, 2019

Jeff Goldblum has been acting since 1974, with a filmography 127 movies deep according to IMDb. He burst, pun intended, into the hearts of many with his first leading role in David Cronenberg’s The Fly. That was the first time audiences were exposed to his well-toned chest; and, with that, the Goldblum thirst seed was planted. Seven years later, Goldblum cemented himself in the public consciousness with his iconic role as chaotician Dr. Ian Malcolm in Steven Spielberg’s 1993 film Jurassic Park. While his role in the visual-effects-heavy blockbuster led to the creation of several memes, none is more indicative of the internet’s love for Goldblum than the well-circulated image of Malcolm lying seductively on a table with his shirt wide open.

But Malcolm is not situated this way with the intention of enticing a lover. No, he is luxuriating on a metal table after he is rendered immobile by a T. rex-related injury. After being thrown into a restroom hut by the massive dinosaur, he is rescued by Dr. Ellie Sattler (Laura Dern) and Velociraptor wrangler Robert Muldoon (Bob Peck). Malcolm’s leg is broken, but that doesn’t keep him from being a part of the action. He is laid on a table back at the Jurassic Park headquarters to keep him from using his leg, and he assists in devising some sort of escape plan.

But why does he look so sensual while doing it? Apparently, the moment was totally unscripted — a spur of the moment decision made by Goldblum. In an interview with Yahoo, he explained, “It’s supposed to be Costa Rica, right? So things are hot and I’m sure I’m in some sort of fever. So all the logic is that we gotta get some of these wet clothes off immediately. As I remember, I don’t think anybody fought me on that.”

Good thing they didn’t, since that one small outfit change would later go down in internet history. While the image may not be as widely applicable as some of Malcolm’s quotes, such as “Life, uh, finds a way,” it embodies both the character of Dr. Ian Malcolm and the public persona of Goldblum himself. The swagger of Goldblum, his charm, his signature unique delivery, and the way he carries himself all culminate in the way he so casually lounges on the table despite his injuries. 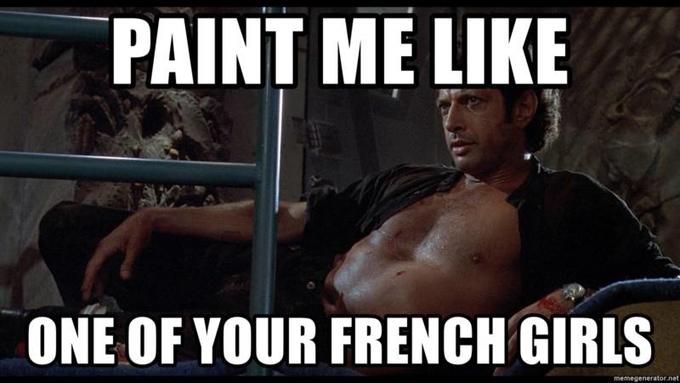 Long after the film’s release, the image took on a life of its own and became a meme. While most memes often include a standard format, such as a text overlay, the sexy Jeff Goldblum meme was different. The image took on many forms, changed to fit whatever a person needed. Someone overlaid text from Titanic — “Paint me like one of your French girls” — over the sultry photo, creating a lovely 1990s film meme crossover. The image was transformed into an animated GIF in which Dr. Alan Grant (Sam Neill) is resting his head on Malcolm’s breathing chest like he is a Triceratops. When asked if he had seen the GIF, Neill said yes and that “it is stomach-churning.”

Jeff Goldblum AND Sam Neill are gonna be in Thor 3! Do you know what that MEANS?? pic.twitter.com/3YNggG8kum

The image was also made into a painting where Malcolm is lounging in a meadow with a butterfly resting on an extended finger. Sexy Jeff Goldblum is used whenever, wherever, for whatever purpose; it is a multi-purpose meme that exists solely to appreciate Goldblum’s beauty. This specific pose was even immortalized as a Pop Funko figurine to celebrate Jurassic Park’s 25th anniversary. Yes, the plastic statue does have sculpted abs and pecs.

The love for this very important moment in both Jurassic Park and Goldblum’s career culminated in the construction of a 23-foot-tall statue of the pose in 2018. Now TV, a UK streaming service, erected the statue in front of the Tower Bridge in London as their way of commemorating the film’s 25th anniversary. According to a report by CNet, the massive statue took six weeks and 250 hours to create.

But what does Goldblum think of it all? He has a lovely sense of humor about the whole thing. On an episode of Conan, he briefly recreated the pose and even stroked the exposed nipple on his sexy Pop Funko doll. Goldblum is sexy, and he knows it, and he knows the internet knows it, so he leans into the fervent love generated by this meme.

Jeff Goldblum’s chest is the chest that launched a thousand internet ships, all thanks to a film about the dangers of genetic manipulation. Just one screencap awakened an unquenchable thirst that gripped the internet. That thirst is still going strong today as the actor has become a prime example of “daddy,” as well as an oddly charming presence who executes interviews with a blend of confidence and almost-too-stoned energy.

Jurassic Park contributed so much to the world, from technological advances in CGI to the heart-racing idea of humans interacting with dinosaurs. But perhaps its greatest contribution is the character Dr. Ian Malcolm, his iconic pose, and the beginning of a deep love for Jeff Goldblum.