The 5 Most Innovative Episodes of ‘Broad City’

Broad City has continuously pushed the boundaries of television comedy throughout its five-season run on Comedy Central with unapologetically feminist content and a penchant for playing with format.
By Naomi Elias · Published on March 28th, 2019

When Broad City debuted in 2014, it ushered in two brash new voices to the world of television comedy, Upright Citizens Brigade alumna Ilana Glazer and Abbi Jacobson. Broad City is adapted from the pair’s eponymous web series, which was inspired by shows like Seinfeld and Curb Your Enthusiasm that mined the minutiae of life in New York City and Los Angeles, respectively, for deeply relatable comedy. The creators appear as avatars of themselves who are BFFs in their twenties trying to make it in the Big Apple, and its original take on that overused premise has led some to argue it’s even more New York than Friends, the most popular show ever set there.

Glazer plays Ilana Wexler, the younger of the pair, who is defined by her free spirit and sex positivity (she’s allergic to monogamy and keeps a burner phone for dick pics) and Jacobson plays Abbi Abrams, her more traditional counterpart who is passionate about illustration and Bed Bath & Beyond. From watching the women navigate gross but deeply human subway encounters, to dealing with street harassment, roommate hunting, and perma-temping, the wildly funny comedy show has become known for its sneak-attack feminism.

Every episode of Broad City begins with a uniquely animated title card designed by Mike Perry and that’s just one of the countless examples of the show’s commitment to innovative storytelling. Broad City has continuously pushed the boundaries of television comedy throughout its five-season run on Comedy Central with unapologetically feminist content and a penchant for playing with format. Here is a look at five episodes, one from each of the show’s five seasons, in which the payoff for the creators’ creative risk-taking is on full display.

Season 1:  “What A Wonderful World” The pilot episode of Broad City gave us the female-centric stoner comedy we didn’t know we needed. In the episode, the girls ditch their jobs — Ilana works at a Groupon-esque company called Deals, Deals, Deals, and Abbi is a custodian at an upscale gym — to try to attend a secret concert being put on by Lil Wayne. Short on cash, the women come up with desperate ways to make money to afford the pricey concert tickets including responding to a sketchy Craigslist job that requires them to clean a stranger’s apartment in their underwear.

Despite all that, the two don’t actually end up attending the concert and the episode ends with them on a video call with each other from their separate apartments. At episode’s end, Ilana is on the floor of her bathroom puking into a toilet while simultaneously cradling a pizza her roommate just brought her but manages to get a few words out to her bestie, “Wanna come over? We just ordered pizza.” Unfazed by her friend’s hungover state, Abbi simply replies, “What kind?”

This debut episode was the comedy duo’s manifesto about the type of comedy they make and the type of creators they are. They welcomed us into a world that foregrounds female friendship and gives voice to millennial malaise. And what a wonderful world it is. (P.S.: yes, it was very hard not to pick the bottle episode with the poop shoe.) This is the season in which Glazer and Jacobson took over as showrunners. In this episode, Abbi and Ilana explore the concept of FOMO (“fear of missing out”) with a story entirely dedicated to the art of party-hopping. The episode takes place in a series of parties thrown by different members of the friends’ social circle. The straight-edge trainer Abbi works with, Trey, invites the friends over to his sparsely decorated and attended house party where his idea of party snacks is “Cliff bars for the guys and Luna bars for the girls.”

After Ilana gets them out of there by texting “where party” to all of her contacts, they land at a party with her friend Jaime (Arturo Castro) thrown by people who are more their scene. But when they notice the hottest person at that party leaving, Ilana insists they also leave to continue their search for “the Narnia of party-as.”

After their next party (a loud and bright rooftop rave) gets busted up by cops, the friends find themselves deliriously drunk and stumbling around Manhattan. They descend a sketchy staircase that leads to a secret underground retro nightclub where we meet Abbi’s alter (party) ego, Val. A stunned Ilana watches her friend become a completely different person who entertains the lounge with old jazz standards as a bartender explains, “You never know when she’s gonna stop by, but when she does we save on electricity because she lights up the whole room.”

Val is a pool shark, blows perfect smoke rings, and can pull off tuxedo shorts. The moment is perfection as Ilana desperately wants to post about the party but there’s no reception at the bar. Also, because Abbi doesn’t become Val until she’s blackout drunk — the show cleverly hinted at Val in the Season 2 premiere when a stranger calls out the name to a confused Abbi — she won’t even remember the night that she and Ilana experienced the Narnia of party-as. It’s fitting that the show’s exploration of FOMO is also a sendup of FOMO.

Another standout this season is “Coat Check,” an episode where there’s a Charlie Kaufman-esque plot where Ilana hooks up with her doppelgänger played by Alia Shawkat and Abbi hangs out with Kelly Ripa, who plays an unforgettable, deranged, and debauched version of herself. “I worked on a soap opera for 11 years, a sitcom for three years, and I’ve worked on a talk show for 18,” Ripa explains in an oral history of the show prepared by Newsweek. “The number one thing I am recognized for is playing myself on Broad City.”

“Jews on a Plane” is the rare Broad City episode that isn’t set in New York City, which forces the women to do what they do best: improv. This episode takes place on a free Birthmark (a fake organization modeled on Birthright) flight to Israel and as such tasks Abbi and Ilana with entertaining us without the benefit of everything that has come to define the show, like playing off of the pure craziness that is New York City and its host of unusual characters, and bringing in fan favorites like Jaime and Lincoln (Hannibal Buress) to share some of their screen-time.

When Abbi gets her period on the plane but realizes her tampons are inside the luggage she was forced to gate-check, Ilana sets off on a mission to help her friend find a tampon. “Jews on a Plane” manages to make the cramped setting of an airplane where everyone is forced to face the same way just as exciting as a New York backdrop would’ve been. There are a host of guest stars, including Adam Levine (via an airline safety video), Seth Green, and Tracee Ellis Ross as a great new side character, an eagle-eyed stewardess who is comically suspicious of Abbi and Ilana. There’s also outrageous physical comedy and plane-specific drama and hijinks like Ilana seizing the opportunity to join the Mohel Chai Club. Their predicament also leads Abbi and Ilana to think of homeless women who they know have it worse, having to choose between spending their limited cash on food or feminine hygiene when it’s their time of the month. In a manner typical of the show, Abbi and Ilana’s escapades lead them to an important conclusion: “Tampons should be free,” Abbi declares. “Every woman should have access to tampons — all different sizes. And the only reason it’s not that way is because the government hates women.” Years before a documentary about menstruation won an Oscar, Broad City found a way to address period poverty and make it funny. 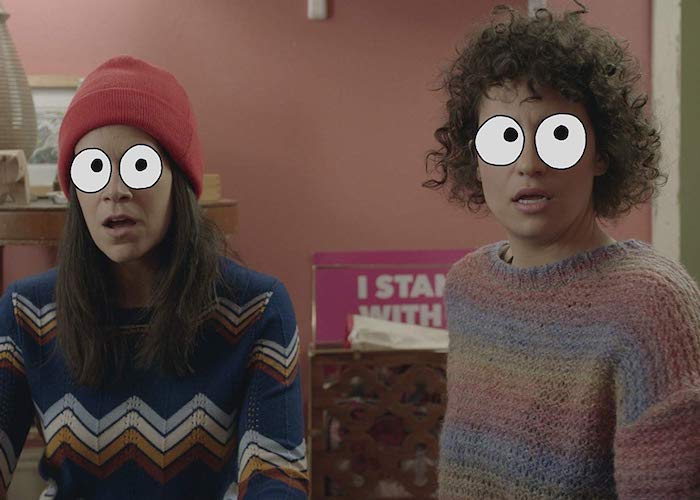 Although this season opens with a very creative Sliding Doors homage, this animated episode is the standout. It’s the weekend, and Abbi and Ilana have decided to take a trip with the help of a medley of ‘shrooms. Once the high kicks in, the city is instantly transformed: the smoggy sky becomes rainbow-colored and dirty swings turn into donuts with pink frosting and sprinkles. Mike Perry, the skilled artist behind the show’s dope intros, squeezed in 14,000 drawings into the 22-minute episode.

As the duo walks down the street, the usual harsh noises that plague the cityscape are also transformed prompting them to put on an impromptu street concert using found objects; they bang on trash cans (which have smiley faces) and newspaper racks in a callback to the pilot episode, Abbi plays white crosswalk lines like piano keys, and a stranger stepping into a puddle of unknown street juice creates a mellifluous splash.

The day soon gets interrupted, though, as Abbi’s boss (Wanda Sykes) asks her to bring a hundred macarons to her house for a party she’s throwing for her French wife. In typical Abbi fashion, she freaks out about getting a work assignment while high, but Ilana calms her down by saying that they’re as cool as cucumbers — and then they literally turn into cucumbers. En route to the party, they begin to come down, and the animation starts to fade. But leave it to Ilana to help them re-up on their highs with her trusty vape pen.

The episode also offers important plot developments for the friends as Abbi’s creative ambition is finally recognized by her boss. The animated trip also helps Ilana come to an important emotional breakthrough. After hallucinating her ex throughout the night, Ilana realizes she isn’t quite over him, which leads to an excellent montage at the end of the episode where she does some questionably healthy but unquestionably cathartic social media stalking of Lincoln and his new girlfriend that culminates in her unfriending him and finally letting go. “Mushrooms” is a vibrant, wild trip for the characters and viewers alike. The Season 5 premiere was another stroke of genius. Ilana comes up with a magical way to celebrate Abbi’s 30th birthday: a trek from “the tippity-top of Manhattan to the tippity-bottom,” which she films live via a stories feature on her phone (Instagram is never officially namedropped). “It looked very different than our other scripts,” Jacobson explained to The Hollywood Reporter. “There was more post work with lots of emojis and text where you could thread the story through other means besides just live-action footage.”

The episode was shot entirely using iPhones (six iPhone Xs, according to the THR episode breakdown). To craft “the litty-est story ever,” the women film their brunch with Jaime and Lincoln, Ilana gifts Abbi a video compilation of her favorite body part — her butt — which she has been secretly recording (literally, behind her back), they return a lost girl to her mother at the Midtown Mall, and contemplate adulthood, Abbi geeks out over a marker aisle, and the day ends in the rare sighting of a double rainbow. “Stories” is a wacky, shenanigan-filled yet sneakily heartfelt homage to their friendship and the limitless possibilities of NYC.