The Best Horror Movies of 2019

Any year featuring good to great horror movies is a great year for horror fans, and 2019 is no different. Films like Us and Midsommar became talking points in pop culture conversations, movies like Godzilla: King of the Monsters and Scary Stories to Tell in the Dark made money at the box-office, and the festival scene was once again filled with indie darlings and previously unknown chillers.

Four of those terrific festival titles from 2019 — The Lodge, Boyz in the Wood, Saint Maud, and Snatchers — would have made this year’s list but as they’ve secured distributors and release dates for 2020 I’m saving them for next year’s round-ups. Even without them, though, it’s been a year rich in variety with monster movies, slashers, psychological terrors, ghostly shenanigans, and some very human horrors too.

A quick note: two of this year’s best new US horror releases made 2018’s best horror list on the strength of their festival premieres and international availability despite not having US distribution yet, so I’m not including them again as part of the numbered ranking below. I am including them at the head of the list, though, as they officially released in 2019, are fantastic, and deserve your attention. Survival tales are their own kind of horror stories, but this gem blends one man’s fight to stay alive in nature with the pesky interference of something wholly unnatural. It’s like a horror-tinged take on Robert Redford’s All Is Lost or a feature-length version of that bit in Dead Calm where Sam Neill is stuck on the sinking ship — but it’s also its own terrifically tense, suspenseful, and thrilling film. It’s one of the smaller films on the list and far from the scariest, but it’s the horror movie that’s re-entered my mind more often than any other thanks to its atmosphere, wit, and unpredictably appealing narrative. The Boat was my #1 pick for 2018, and a recent re-watch via an imported Blu-ray confirms it as a quietly thrilling masterpiece.

Available to buy or rent on Amazon.

One Cut of the Dead (Japan) Of the roughly 73 zombie movies released (mostly straight to DVD) each month, 72 of them are immediately forgettable. They’re a horde of sameness, but this Japanese feature jumps out as a fresh take on the rotting flesh of zombie cinema. Of course, it starts like something far more familiar, but if you stick with its intentional setup you’ll be rewarded with something truly special that delivers laughs, bloodletting, and an endlessly creative take on the frightening nature of indie filmmaking itself. This absolute gem finally got its due in 2019 thanks in large part to horror streaming site Shudder, and I’m happy to see other sites are recognizing its greatness.

Available to stream on Amazon/Shudder. Horror is subjective. I don’t expect you’ll see this film about the 2008 terrorist attacks across Mumbai on other “best horror” lists, but its focus on the slaughter of hundreds at the city’s celebrated Taj Hotel is as harrowing, nerve-wracking, and horrifying a watch as you’re likely to see this year. The story is based on the real event, and the terror is tangible by design. If the definition of a horror film is one that intends to scare, unsettle, and/or disgust viewers, then Hotel Mumbai accomplishes that goal. If you need a label, consider this a home invasion movie — a sub-genre long accepted as horror — but instead of focusing on a single house it instead sees an invasion across multiple floors and rooms of an elaborate hotel. This is an important film for the way it recognizes the quiet heroes who saved lives, but it’s a horror film for the way it unnerves, disturbs, and horrifies. Horror is under no obligation to be fictional.

Available to buy or rent on Amazon. While zombie movies have been ubiquitous for a couple decades now it’s only in recent years that the zom-com sub-genre has approached a similar level of frequency. Some are good, most are not, but happily Abe Forsythe’s Little Monsters lands in the former group with a big smile and plenty of blood. Ignore the forced romance and instead focus on the brilliance of casting Lupita Nyong’o in the lead as a dedicated kindergarten teacher able to face off against the undead if itmeans keeping her students safe, sound, and uneaten. We get some big laughs, plenty of blood, and in a turn that probably gave Disney executives heartburn we’re also gifted a terrifically funny performance by Josh Gad — yeah, I said it, Josh Gad is fantastic here playing against type as a children’s entertainer. A cantankerous children’s entertainer who’s not at all sorry for boning all those kids’ moms. Sorry Disney…

Available to stream on Hulu. Shane Carruth’s greatest gift to film fans remains his 2013 feature Upstream Color which saw him star as well as direct, write, shoot, edit, and compose, but here he’s just acting as an actor and doing a stellar job of adding to the ensemble and atmosphere. The film is a solid and sometimes creepy thriller that gives you just enough information to stay interested without filling the screen with exposition and explanation for its tale tackling mental illness, oversaturated hospitals, and *something* deadly from beyond death. Writer/director Billy Senese treats each element with an eye for the serious, and while it’s a slow burn at times the finale gleefully and grimly cuts loose with a high body count (including some kids, which per my brand, is alone worth an extra 1/2 star).

Available on DVD and digital via Amazon. 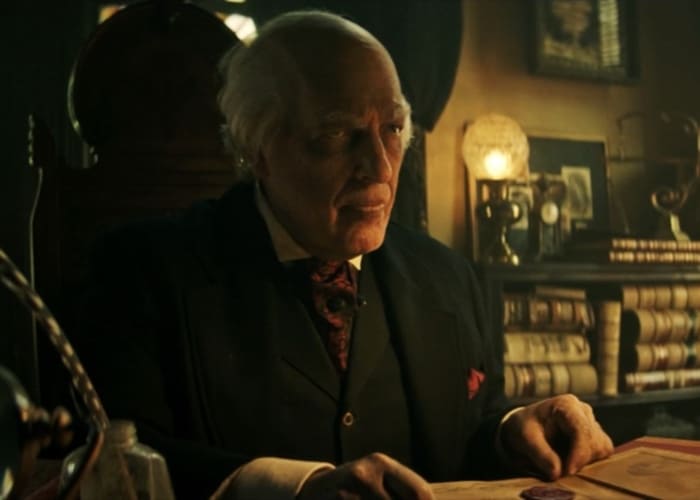 Horror anthology films used to be all the rage, but these days genre fans are lucky if we get more than one per year. Writer/director Ryan Spindell shares our appreciation for the format and delivers a solidly fun little mix of tales tied together with an immensely entertaining turn by Clancy Brown as a mortician with a deadly secret. The final segment — previously released as a short film called “The Babysitter Murders” — is the absolute standout, but each of the tales features both smarts and entertainment value leading to a wonderfully eerie wrap-up and the hope of a sequel.

Currently on the festival circuit.