The Anatomy of a Great Car Chase

Every great car chase is a combination of several filmmaking elements. In honor of ‘Baby Driver,’ we explore.
By Emily Kubincanek · Published on June 27th, 2017

Every great car chase is a combination of several filmmaking elements. In honor of ‘Baby Driver,’ we explore.

Recently Indiewire posted an article that listed the car chases that inspired Edgar Wright in making his newest film, Baby Driver. Not surprisingly he named the easily most famous ones from Bullitt and The French Connection, but also scenes from other older films that didn’t use the technology available today. To appreciate the exciting car chases we see on screen, I’ve compiled a crash course on how they are written, filmed, and edited.

Deciding to include a car chase in a script must have some value plot wise. Being a screenwriter myself, I speak for most (not all!) screenwriters when I say we don’t have much experience with stunt work and everything it entails. For that reason, the version of a chase in the screenplay is usually a rough outline of where the writer sees the scene beginning and how it ends.

From there, Shane Hurlbut considers it imperative to go to the location where the chase will be filmed and rewriting the scene with the stunt coordinator. Location and production limitations may change what the screenwriter had in mind, so the stunt coordinator creates a new beat outline of what will happen in the scene.

Next, the shooting script will be developed. The notes the stunt coordinator came up with will be in the script, along with every action any of the stuntmen or actors will take in the scene. You can view the shooting script version of that very famous car chase in Bullitt here. You can see how every quick change in point of view requires a new scene heading and below it is a short description of what each character does in the scene. Hurlbut says that once that is written out and carefully planned, there isn’t much room for change once filming comes around. The stuntmen rehearse, sometimes months in advance, and the crew prepares everything needed to pull off the stunts in the scene. Then the fun begins.

The process of filming a car chase seems to vary with those involved and their use of technology, but one thing remains constant—they are all filmed out of order. The chase sequence itself is created in the editing room, but more on that magic later. Each beat in action is filmed separately, sometimes beginning with the end of the chase.

Much to the eager actors’ dismay, they only do a portion of the driving involved in a car chase. Even highly trained in stuntwork like Steve McQueen and recently Ansel Elgort, directors aren’t stupid enough to put their prized stars in harm’s way when they have stuntmen for that.

In order to create the illusion that the actors are driving the entire time, camera operators film from behind the stunt driver, over their shoulder, as was done in The French Connection. Cameras are mounted inside the cars and on the sides of cars, which first happened in the filming of Bullitt, to get the shots the director wants.

Filming with the use of modern technology can be easier and more difficult in some cases. Modern films like Need for Speed and Fast and Furious use green screen technology for filming footage of the actors driving after they have done the stunt work. What proves difficult with this technology, is recreating the atmosphere that the stunt work was filmed in, specifically the lighting. After all, even if the actors are “driving” a stationary car in a studio, the filmmakers must create the illusion that they’re not.

In the chase that plays behind the opening credits of Deadpool, a lot of what you see is because of CGI. The filmmakers were not ashamed to use visual effects to create their chase scene because they were under a smaller budget compared to other superhero movies. Instead of using storyboards to plan the action like older films before them, they could use 3D pre-production technology called previsualization to plan out what they wanted the scene to look like after they do the small amount of live-action filming and the visual effects afterward. This technology gave them the opportunity to create over the top action and characters that may not have been possible without CGI. 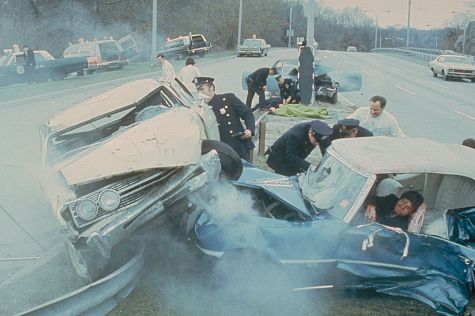 After all, filming without that technology is hard enough. The French Connection can attest to that. It is notorious for being one of the most dangerously filmed scenes, even after they planned the action before hand. However, they didn’t purchase they proper permits to film in the streets of Brooklyn. Even with the NYPD’s help to control traffic, an unsuspecting driver drove onto the set and clashed with the chase. They chose to keep the shot in the film, but the producers had to pay for the damages to the car for that realistic shot. Then after all the footage is collected of the actors and the stuntmen, it is sent to the editors.

William Friedkin, the director of The French Connection, says that: “But at least 50 percent of the effectiveness of the sequence comes from the sound and editing.” All of the sound is done after filming in the editing room, which holds the huge weight of creating the tension needed for an exciting chase scene. Editors take footage and arrange them, cutting and pasting sometimes not in the order they were envisioned. It’s in the hands of the editors to create that seamless scene that audiences see on screen. It’s also the time when any visual effects are applied to live-action footage. Alfred Hitchcock gave the producer of Raiders, Howard Kazanjian, some advice when compiling a chase scene:

“Music helps with a chase scene…Quick cutting helps. Hitchcock used to say to me, ‘Once you’re inside a car, and the car is careening down a road and it’s lost breaks, it’s hit the side guard rail and is about to go off the cliff, you gotta stay within the car. You can’t suddenly have a camera out in the pasture watching the car go left to right, because you lose the intensity of being inside the car.’”

Edgar Wright, who was heavenly influenced by films made before CGI or green screen has publicly said that he didn’t want to use that technology to create the chase scenes in Baby Driver. He takes a jab at the Fast and Furious filming when he said that, “Those guys are nowhere near the action — usually that’s on a practical level…But we shot all of the actor shots for real on the freeways.” Hoping to achieve the authenticity of the older films that inspired him, Wright took the time to train his actors and shoot where the stunts happen as well.

See all the crew’s hard work in theaters everywhere June 28.